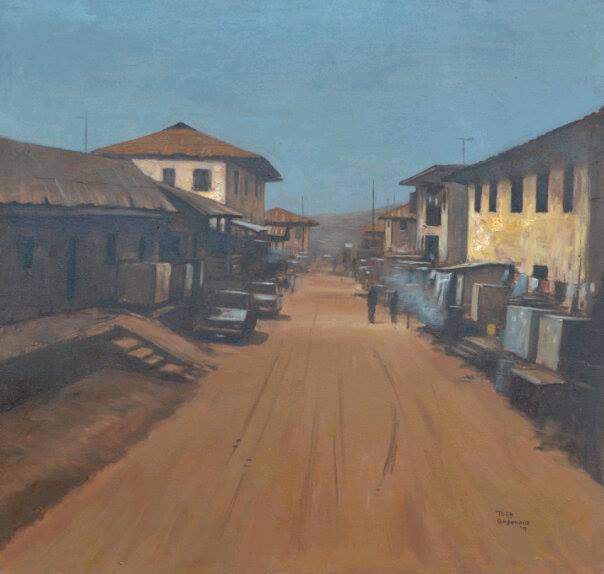 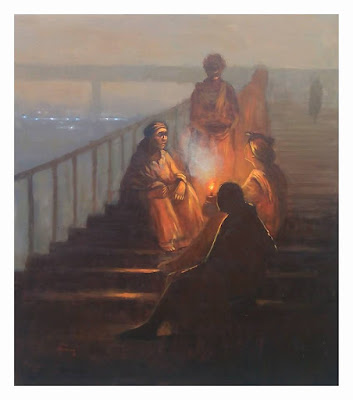 There is an arresting resemblance between Tega Akpokona’s work and that of Abiodun Olaku. At first glance one is forced to assume that Akpokona is copying Olaku’s work, who many have described as master of night scene.  “So far nobody has told me I'm copying Olaku. Even Olaku himself said my painting is different and I've found a niche for myself,” he says.

However, Akpokona admits that he was influenced by Olaku. “Everyone is influenced by some in one way or the other when it comes to art and creativity. "I was under direct mentorship from him. The influence is inevitable. Olaku mentored me, I was an intern at his studio and receive direct tutelage concerning professional practise of art.”

For him, “Olaku’s influence is only normal. Same way he has the Yusuff Grillo’s and Kolade Oshinowo’s influence. Most people who follow my work can spot my work amidst a crowd any day.”  He says that Olaku described his style as “unique”.

Is Akpokona going to continue to paint this way or will he shift later? “I don't think I can determine now the way I will paint later. My present and past visual experiences influence my art. What I would paint on the future, I can't say now…” 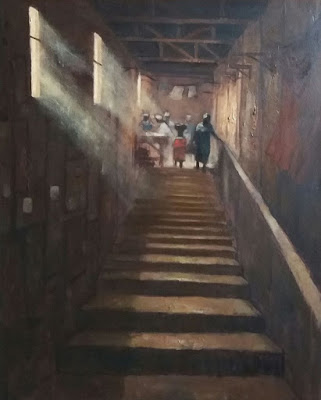 His exploration of light and colour catches the eye and holds your attention to view his work, his painting is imbued with traditional techniques – richly layered oil paintings with fascinating pose of each subject which finds its way through the overlays of colours and light impressions. His paintings present juxtapositions of reality and impressionism.

Over time, the artiste has gradually evolved into an exploration of pure realism. “Surprisingly as young artists and art students, we hear a lot of people say realism or representational art is no more in trend. It turns out it's not true after all. In any case the aim should to strive to create timeless art to the best of your ability at every given time.

"I paint figuratively because human emotion has always been a key factor for me to tell a good story and stimulate catharsis.”

What inspires his work? “Life is the term broad enough to fully describe what inspires my work. This painting titled Liminance (sold at the art house affordable auction 2016) is about a place called Oba Market in Benin city, where I grew up. For a period of time I was home alone with my father, so I went there a lot to buy food items.

Who are his audience? “My art seems to allure some intelligently discerning art   connoisseurs. I hope it continues that way.”