Market Queens, oil on canvas by Ablade Glover, a Ghanaian foremost artist, was the most expensive artwork sold at Lagos Art Auction this year, at the price of 3,200,000.00 Naira.

He studied in Ghana, Britain and the United States of America. Professor Glover has a number of distinctions which shows his importance as an art educator and an
artist. After retiring from university work in 1994, he focused on his passion as a painter and started the most productive years of his artistic life, his mature period, with a steady production of highly acclaimed and intensely dynamic oil paintings, his work glows on constantly changing urban spaces or natural environments.

Glover is easily recognised as a father of African Contemporary Art and international face of African Art. He believes the artist is a guardian of the traditions and culture of his society.

Those who are not familiar with the Lagos art scene may not know Aderonke Akinyele. She is the curator for Terra Kulture Art Gallery, a leading Art Gallery in Lagos, Nigeria. And also the curator and project manager of Terra Kulture Mydrim Auction House (TKMG), where she has curated approximately 3,500 contemporary Nigeria artworks for the gallery and auction house since 2013.

The art curator and project manager has an educational background in visual arts and creative enterprise.  Akinyele specializes in art curation for contemporary and modern art. She is a portfolio manager for a handful of artists, private collectors and institutional organisations.

She is working on other titles and she acts as curator /project manager to many other art oriented projects including art exhibitions, Art forums/workshops/seminars and organisation art projects. She is an alumnus of the Birmingham City University, Birmingham and the University of Lagos, Lagos. 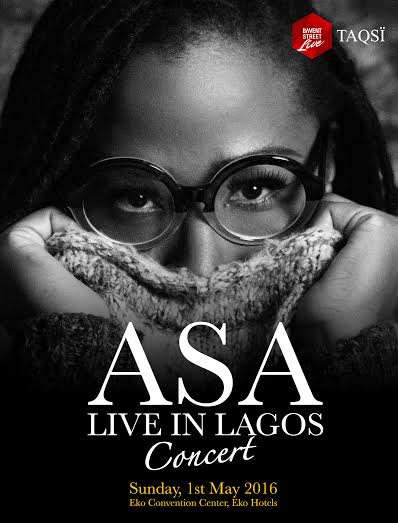 Nigerian sensational singer Asa, whose real name is Bukola Elemide is set to hold her first live in concert on May 1st at the Eko Conventional Centre of Eko Hotels, Victoria Island, Lagos.

Asa, who has three (3) internationally released studio albums -LIVE IN PARIS and LIVE IN TOKYO DVDs and chart-topping singles to her credit, will perform her most popular hits as well as tracks from her three albums including latest album 'Bed of Stone' at her concert, fans of ASA sensational music just have three more days to get their ticket and view their darling artist live at Lagos.

Asa is a Nigerian born in Paris; she became an artist in Lagos, fuelled on old-school Soul and was later signed on by a French label (Naïve Records)  and has toured extensively in Europe, North America, South America, Asia, Africa, Australia and the Middle East and has many awards to her credit such as Headies Album of the year(2008), Prix Constantin(2008), French Music Awards Victoires de la Musique nomination for "Female Artist of the Year".(2011) and Headies nomination for "Best "R&B/Pop Album", "Best Alternative Song", "Best Vocal Performance (Female)", and "Best Recording of the Year"(2015).
at April 28, 2016 No comments: