‘Motion and Emotions’ by Ogaga Tuodeinye at Terra Kulture


Leading Nigerian artist, Ogaga Tuodeinye, Friday revealed in Lagos that he has concluded plans to
display over forty works in his forthcoming solo exhibition titled Motion and Emotions.


Tuodeinye, who has been away from the art scene for a while revealed to correspondents that the art exhibition of paintings and drawings will open from Saturday, March 5 to 14, at Terra Kulture, Victoria Island, Lagos. He said viewers will be confronted with his new distinctive creative vision, bursting variety, colour and remarkable new works and technique. What stands this show out from his previous shows; he said is the introduction of a new technique, which he described as “drip technique.” The artist confessed that a lot of canvases went into the dustbin before he could perfect the technique.

He is offering collectors and viewers a variety of choices, ranging from mix media, oil on canvas and acrylic on canvas.  Several narratives can be seen from the works, as the theme depicts the artist exploring more female subjects in the exhibition. The drawings for this show, he hinted, were done during his student days. The other thing worth mentioning in the exhibition is the beautiful mix medium works created with waste.

What inspired Motion and Emotions? The artist from Bayelsa said “The idea came as a result of what I noticed about humans in general...nobody is static; we are all moving,” and “life is all about movement and motion. Immediately one is static mentally and emotionally, the person is dead.”

His years of “hiding in a box,” he said gave birth to the technique. Tuodeinye said it is important for an artist to stage a show when he has something new to show the public. “I didn’t want to come out with my usual style; I had to stay back a bit. Not until two years ago I stated doing the dripping technique.”

The artist played with colours, forms and moods. In some of the works, you see vibrant colours and some warm colours while some are like illusion. To him, “Controlled extreme individual attitude in art is a drive that carves a niche for the creative mind, giving the artist an identity that makes him stand out in a cloud of other creative minds. All the concept from the show is part of the movement,” while he stressed that the motion is linked with attitude.

Works which will be on display include: Elders Forum, By Their Fruit, Beyond Limits, Motion, Priceless Bond, Emotion I and II, Out of the Box, No Third Party, Virtue, Self Esteem, Caution, Priceless Journey of a Mother, Loud Silence I and II, etc. These works are inspiring and captivating.

The exhibition is being curated by Ronke Akinyele, the artistic director of Terra Kulture, and supported by FlowersTalk.
at February 26, 2016 No comments:

The controversial arrest of Jelil Akitu 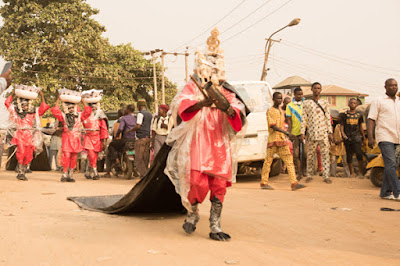 When Jelili Atiku was arrested recently following a performance in Ejigbo, the local and international art community felt the artist’s freedom of expression was under threat. What many didn’t know, however, is that there has been a battle for years between Atiku and the traditional ruler, who is also his uncle and that it only escalated this year. Udemma Chukwuma, who recently got to the root of the matter, reports
If you have been following the news lately, the story of Jelili Akitu, a performance artist and sculptor, who got arrested recently, would not be new to you. It all started when the artist announced on hisFacebook wall on Sunday, the 17th of this month that he had been arrested. Because the artiste didn’t provide much information, apart from the lone sentence, “I have been arrested by the police,” speculations emerged and few knew which version to believe.
That post also led to series of protests. Among the protesters were members of the Society of Nigerian Artists (SNA), who gathered at the National Theatre, Iganmu, Lagos. On their banner was written: “Nigerian Artists say yes to Freedom of Expression, Nigerian artists condemn the incarceration of Jelili Atiku.” 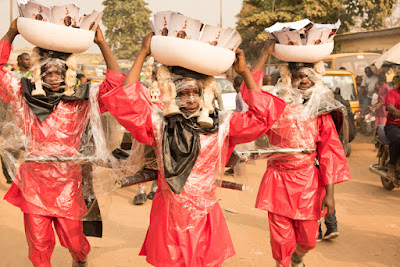 Comments followed comments on Atiku’s Facebook wall, and more comments even when he announced that he had been released. “I was arrested around 10:45 pm,” Atiku recalled, “I just returned home from my nephew’s place downtown, when nine policemen stormed my family house in Ejigbo with guns.
“They knocked at my door and I opened it, and they entered with big guns. When I asked what they were looking for, they said the Divisional Police Officer (DPO) wanted to see me.  When I tried to probe further, one of them shouted at me and said ‘you criminal, go and dress up’ because I was half naked.” Atiku, who said he was frightened “because they were with guns,” obeyed the command and followed them to Ejigbo Divisional Headquarters, not far from his house.
Continue http://bit.ly/1QBZFxa
at February 15, 2016 No comments:

The Kano State Government in collaboration with Topseal Communications Limited is organising a commemorative event in honour of the late military Head of State, General Murtala Ramat Muhammed.


General Muhammed, regarded as an illustrious son of Kano, was one of the two indigenes of the state that had so far governed the entire nation. He is believed to have left an indelible legacy as a leader. His accomplishments are of reference till today.

Widely regarded as having played a significant role in shaping the destiny of Nigeria and Africa, at large, General Muhammed was seen as a leader who had exemplary attributes of heroism, patriotism, dynamism, integrity and selflessness.

In a tribute to Murtala Muhammed, with whom he served on the War Cabinet during the Nigerian Civil War, Chief Obafemi Awolowo, one of Nigeria’s most highly regarded statesmen and authorities on leadership, had this to say about him: “He was tough, dogged and fearless. He was frank to a fault, and like all those caught out for greatness, he was constant and unchangeable.”

Some observers are also of the opinion that there is a catalogue of correlations between the present President Muhammadu Buhari Administration and the regime of General Muhammed, especially in the area of anti-corruption drive and far-reaching policies aimed at repositioning the country. President Buhari is also regarded as a faithful protégé of General Muhammed.

The state government and the Topseal believe that 40 years in the wake of Murtala’s tenure and demise is a milestone period to commemorate the iconic leader and also celebrate his legacy.
Highlights of the commemorative programme, taking place on Saturday, February 20, 2016, at the Coronation Hall, Government House, Kano, include: Tributes, Book Presentation and Endowment, Exhibition and Cultural Activities.

Many indigenes and dignitaries from within and outside the state, including His Royal Majesty, the Emir of Kano, Sanusi Lamido Sanusi, are expected to grace the occasion.

During the occasion, the widely acclaimed biography of General Muhammed, The Hurricane, authored by a journalist, Taiwo Ogundipe, with the foreword written by ex President (General) Olusegun Obasanjo, a close associate and successor of the late leader will be presented and its endowment for wide distribution to schools, libraries and other institutions will be instituted.

The Hurricane, after a thorough assessment, secured the official approval of the Nigerian Educational Research and Development Council of the Federal Ministry of Education, Abuja, and has been certified suitable for use in the Nigerian institutions and recommended for adult readers and tertiary Institution’s libraries.

According to Mr. Taiwo Ogundipe, the author of the book, which has received raved reviews, “the main idea behind promoting The Hurricane is to make many Nigerians, especially the young ones, as well as the people of the world generally, know that we have heroes and values worth celebrating in the country.”

The Hurricane, a product of extensive research and interviews, paints a very intimate picture of General Muhammed. It traces the roots of the General and his progenitors. It also focuses on his birth, his growing-up years, his schooling days, his life as a young man as well as his military training and career. The book also highlights his marriage and family life, his performance as a soldier; his involvement in the post-independence crisis that engulfed the nation, his emergence as a national leader, his role as head of state, his tragic death and finally the after-effects.

General Olusegun wrote in his foreword to the book that it is “a good research work on the person of the late General Murtala Muhammed. It is a well outlined piece of writing on the life and times of the late Head of State who was indeed a personal friend and a professional colleague in the Nigerian Army. The Hurricane has effectively captured the historical perspectives of the work of the General, depicting his effort to bring about discipline and sanitization of the military and the Nigerian civil society.”

The late Major General J. J. Oluleye, a major participant during the military regime of Murtala, and the author of the book, Military Leadership in Nigeria: 1966 – 1979, also wrote about The Hurricane: “I looked through the draft and concluded that you are dead on course.”

To date, most of the books that have been written by some of the major participant–observers on the military’s involvement in Nigeria’s governance have only made passing references to Murtala. The other ones that have been specifically written on his tenure focus largely on his administrative policies and pronouncements. None gave detailed human angle accounts of his life and death, until The Hurricane came on the scene.