Exclusive: Former Araism Member Opens Up About His Ordeal in the Group 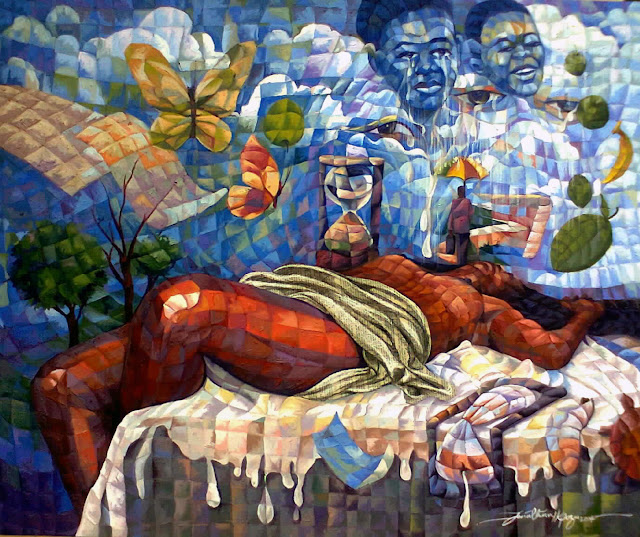 Observing from his recent works, Jonathan Ikpoza, a known disciple of Araism Movement, has shifted from araism to geometrism. The talented artist says he is no longer a disciple of the movement “after seeing that the platform was no longer fit for my art.”

Ikpoza further explains to Arts and Culture Place in an interview that “the organisers of the movement were chasing personal glorification and dishonest profit from my sweat and artistic products, which they still remain in financial debt to me till date without interest to pay.” 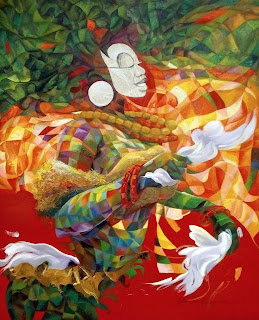 To him, araism was not giving him a realistic visual language to express himself. “As a versatile artist, I enjoy challenges in new media and techniques. To an audience viewing araism paintings, he or she will think it takes so much work and time to produce than it really did. Painting in geometrism which are characterised with flow of geometric rhythmic movements of lines and shapes enveloped into creative colour orchestration takes more time, energy and is more challenging for me. The present body of works done in various media shows how expandable geometrism is.”

He hints that the reason he joined the movement was to us the platform to showcase his artistic prowess and presence. “While experimenting in Araism techniques, the art of using broken lines and creating cracks all over the canvas surface limited my expression in colourism. These limitation was a constant challenge I had to battle with as I continued.”

His style of painting and drawing in his present works is geometrism, a technique he has been exploring since 2003, which he says is very much refreshing to him. “I started painting in araism technique in 2005 to experiment more in art, exploring the techniques with tempera powder mixed with white glue before the now common use of acrylic. I joined the proponent after I have mastered the technique so as to launch Araism as a movement since he (Mufu Onifade, the originator) was the only artist known with the technique which was argued as a style and not a technique.”


Ikpoza was born in 1979. He hails from Delta State, Nigeria. He holds Higher National Diploma from Auchi Polytechnic, Auchi, Edo State (2009). He had exhibited his works in Nigeria, Senegal and Greece. He had participated in over forty national and international group shows.