Book Review: 'We Are All Biafrans' 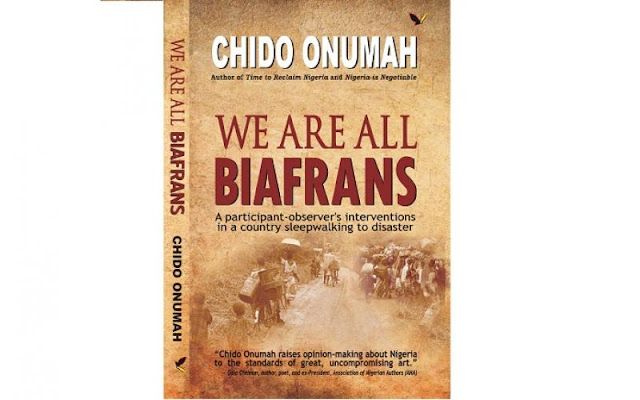 
Faith is a Nigerian. That is why the average Nigerian response to the question: “How are you” is “We thank God”, “I bless God” or “Alhamdulillah”. Symbolisms of serendipity and the divine loom large in our leadership choices and political economy. A recent President had a name that rhymed with “Doer” and was married to a wife whose name is redolent of a popular Satellite phone brand, Thuraya. He was succeeded by a President whose first name guaranteed luck in abundance, accompanied by a wife named Patience. The irony of why a doer needs a satellite phone or why a man with all the goodluck in the world needs it garlanded with patience escapes us all. Before them was a President who claimed to have “walked through the valley of the shadow of death.” After them, numerologists busied themselves with the significance of the fact that the current President was returned to office, on All Fools Day, 30 years after his first stint.
Preoccupied as we always are with extracting the divine from the mundane and addicted to a dependency on the Almighty, the country appears to be “sleepwalking to disaster.” This is the sub-title of the Chido Onumah’s latest book We Are All Biafrans, published 50 years after the birth of the author to parents who came from the secessionist territory of Biafra to which the title pays homage. Anyone who thinks, however, that this title is about breaking up Nigeria would be mistaken. The author is an unapologetic Nigeriaphile who believes only urgent action to re-balance the country will save his beloved country from implosion.
Unsurprisingly, the author lays out a clear premise in his personal experience for this voyage of essays: My parents are from Imo State in south-east Nigeria. I wasn’t born there. I didn’t grow up there. I live and work in Abuja and I am married to a lovely woman from Ogun State in south-west Nigeria. Yet I have to “claim” Imo State because in the crazy world of Nigeria, your “state of origin” confers on you certain privileges and opportunities, depending on what you are looking for and where you find yourself. I am sure there are millions of Nigerians who share my unease.
This book is an appeal to those “millions of Nigerians” who share the author’s unease about the “crazy world of Nigeria” to remake a country in which they can all coexist as equal citizens. It is, therefore, a passionate argument for those things he believes could be done to save his country and a no-holds-barred declamation of the tendencies, institutions and people who stand in the way of achieving these.