And She Persevered on view in Lagos 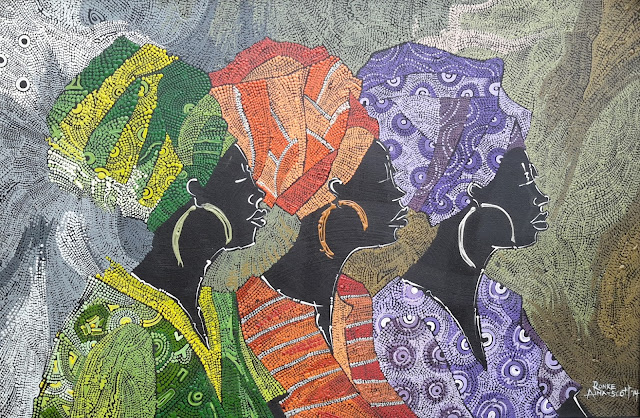 And She Persevered a solo art exhibition of paintings by Ronke Aina-Scott will open on Saturday 4th August at 3pm at MoorHouse hotel, 1 Bankole Oki Street. Ikoyi, Lagos, Nigeria.
In this exhibition organise by Weave and Co gallery and curated by Moses Ohiomokhare, Aina-Scott's presents simple ways for people to understand complex social issues like womanhood and other phenomena using acrylic on canvas and mixed media, the very painstaking process of pointillism, and more art forms and styles.
"I want people to see the environment from least expected and previously unexplored perspectives, because that is one power that art wields. I honestly do wish to encourage objectivity with my art, because it is not enough for humans to be subjective. We need more voices, honest voices and platforms to speak from, which is even why I plan to open an art gallery at the Ikorodu axis of Lagos very soon. Social issues can be addressed properly only when we remove our emotions from our dealings, and to do this, we can exploit the amazing avenues that art presents", says Aina-Scott.

Considering the type and calibre of crowd her previous solo exhibition drew - former MD/CEO of Fidelity Bank PLC, Reginald Ihejiahi and lots more Executive Directors and art maestros - this year's solo effort is expected to be bigger and better.
Exhibition runs till August 17, 2018. The event is to be declared open by Mrs Ijeoma Nwogwugwu, MD, Arise TV, an ardent lover and supporter of the Arts.

Aina-Scott works and lives in Lagos, Nigeria. Her works have been featured on various art platforms locally and internationally - Best of Ife '95, Naija Women Exhibition by Tourshop (2007), Lakeville Art Festival (Minnesota, USA) 2014 - and are well represented at various Nigerian galleries. She has been well reviewed by contemporary artists such as the revered Olusegun Adejumo and even the local and international media.
Aina-Scott depicts themes as dynamic as her choice of art forms, lending her works and myriad of African values without any conflicting messages. Aina-Scott has been a journalist, graphics artist, and banker at different times in the past, and remains an unabashed horticulturist even while art holds her heart.

Historical accounts are vague as to when and if the Bini (Edo), migrated from the Nile valley. What is not in doubt is that the earliest rulers of Benin were called Ogisos.
Thirty-one Ogisos in all ruled the kingdom of Benin between 900 - 1200 AD, which is the earliest period so far accounted for in Benin history.
Read more »
at July 05, 2018 No comments: Links to this post