Beyond Functions on view

“My passion for ceramics and creative arts started since my childhood,” says Djakou Kassi Nathalie. She explores and experiments with many media such as cement, copper, plaster, wood, iron but clay she says remains her best medium, “in which, I engage the use of many techniques such as modelling, engraving, carving and glazing.”

The Cameroonian born artist, who lives in Port Harcourt, says: “I am interested in all subjects, inspired by nature, animals and the environment, with themes that blends between modernity and tradition.” Her works are mainly sculptural, finished with many types of ceramics colours and glazed.

Nathalie's works are currently on view at Moorehouse Hotel, Lagos, Nigeria. In a joint exhibition with Ato Arinze. Organised by Alliance Francaise Lagos, in collaboration with Potters in Town and Moorehouse Hotel.

The ceramics sculpture and pottery exhibition titled Beyond Functions, opened on Saturday, November 12 and will close on the 19th of November, 2016.

Arinze in this show takes us back to the Mediterranean Sea with a piece titled: I Love Syria; depicting a toddler who drown in the sea while migrating to Europe from Syria. Another piece titled Immigrant brings back to mind the number of people who lost their lives at the sea in over loaded boats.

One cannot but wonder how possible it could be for someone to document these events with clay and still convey a message.

Arinze says his thoughts, concept and feelings are influenced by nature and events, the shape and forms of each work depends solely on his vision as inspired by activities around him and world news.
Arinze proves his love for trees and nature in a good number of works. He makes an artistic statement that purports the go green campaign that concedes to help our ecosystem from dissolution by urban developments. 'Survival and Tolerance' is a ceramic piece that displays the struggle of nature using visual personification. The tree which signifies nature is in a twist that illustrates endurance and struggle for mere existence.

“I love Trees, I like to listen to their silent voices in nature, to reflect on their salient lessons and how we as human can connect this teaches to our world. Time was when trees were everywhere but today, we have lost them to concrete walls in the name of developments; the environment is at a big loss for this reason.

“Hence we must take the plant a tree campaign very serious. For those of us who lives in the concrete jungle called cities, this clay sculptured trees are meant to serve as a tool for meditation and contemplation aside the decorative functions of the pieces.”

He beliefs that humans are affected by the challenges of life, seeking for better ways to make life easy and free; “similarly, the trees in the forest faces greater challenges: unlike human beings, with their innate sense of humilities they tolerate the forces of nature and the selfish attitude of man in their destruction of the ecosystem.”

The exhibition as the name implies was organised to debunk existing ideologies that regard ceramics as functional art pieces alone. In a work titled 'Chaos' by Nathalie, it displays a domed clay surface with stylistic African faces of different sizes in disarray. The faces, entangled in a chaos of patterns outlined with black may be Nathalie's representation of the current state of Africa.
at November 17, 2016 No comments:

Yellow is the Colour of Water 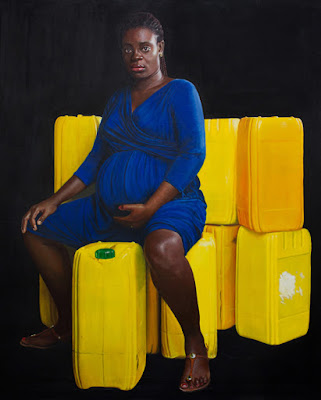 The taste Jeremiah Quarshie left in the mouths of his viewers in his last solo art exhibition last month, is yet to be forgotten. The works of the Ghanaian painter contain urbane portraits characterised by distinctive realism.

Quarshie’s hyper-realistic paintings explore the boundaries between physical and digital production; considering the construction of imagery, his work investigates the nature of art itself. Through detailed portraiture, emphasising the connectedness between people otherwise divided by social, economic or geographical conditions.

The artist reveals an acute social awareness. Using images of ordinary people, such as labourers, nurses, pregnant women, market mummies, expatriates and several others to convey his message.

His work takes its history from social illogicality in contemporary life while negotiating anxieties with satire and lightness. Exposing the contradictions that border on the quality of water and its availability. 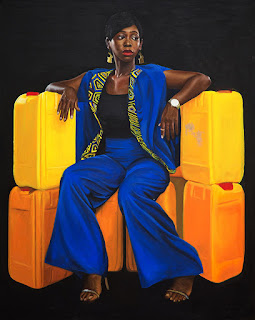 He works with mostly colourful yellow gallons. Thus, titled: Yellow is the Colour of Water. The exhibition of paintings revolves around water and the ever-present yellow plastic gallons that permeate all parts of Accra thereby vividly revealing one of the problems facing the city.

Curated by Robin Riskin, the exhibition is in a range of media formats and set across a network of site-specific mediations. These include Kotoka International Airport and the Tema Bus Station where gallons equally take the role of backdrops, props and chairs. 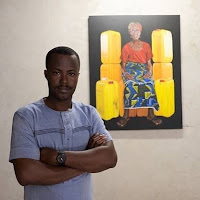 He graduated from the College of Art, Kwame Nkrumah University of Science and Technology (Kumasi).

Exodus an art exhibition by Nyemike Onwuka, a contemporary Nigerian artist, is not focusing on the state of contemporary art in Nigeria, nor does it encapsulates any artistic trends or phenomena. Instead, it highlights the unique aspects of the artist’s perspective on issues affecting women and children.

Nyemike’s new body of works in that this ongoing solo exhibition introduce the use of stencil in depicting patterns, words and symbols to tackle the social decadency affecting women and children all over the world today. A topic many artists pay less attention to.

He engages the viewer by creating captivating images, forms with narrative content by adapting metaphor and allegory. Focusing on facts and history in order to make and unmake boundaries—those dividing communities, regions, nations, and continents, as well as those separating past and present, reality and dreams, and rationality and absurdity.

“The need to further strengthen my message prompted extensive research which led to the use of bold texts i.e. alphabets, numbers and shape patterns. Alphabets, numbers, shapes and colours are key elements in the composition of mankind's daily experiences; vital in the description of life's situations e.g. date, time, objects, events, etc.” he explains.

His style and technique have evolved through years of practice. Today you could see a progressive transitional journey; his artistic evolution, from his experimental and figurative works. A distinctively unique style of elegant urban decay, driven on using texts and patterns ingeniously to project his thoughts onto canvas and also to embellish. “Combining the need to evolve as an artist with the need to express my feelings has brought about the body of works which I call Exodus.”

The evolution of art is a result of experimentalists of the art world, a mind class of artists, which Nyemike over the years has proven to belong to. He explores the dynamism of eye pencils, liquid latex and oil bars in creating works with extraordinary aesthetic components and depth. “In this collection I have opted to explore a more colourful approach to painting, combined with my use of latex and figurative representation of the subjects. Exodus has proven to be a different experience altogether in creation and in viewing.”

The exhibition of paintings, drawings, mixed medias and installations, which opened last weekend, Saturday, November 12, at the Signature Art Gallery in Lagos, Nigeria, will run for a week.

“I hope with Exodus I have been able to entertain the viewers and also pleasantly sensitise them on the subject of 21st century slavery survivors,” he says.
at November 15, 2016 No comments:

Twenty years after, a contemporary Nigerian artist, Victor Ehikhamen, remembers the Ogoni nine, who were executed by hanging on Friday, November 10, 1995, by the military administration of General Sani Abacha.

According to the artist, the exhibition “is to acknowledge history so that knowledge won't be executed by ignorance,” wrote Ehikhameno on his Facebook wall. The artist said it took him two weeks of dedication to install the work.

He revealed to Arts and Culture Place in a chat that the work will be moved to Poland in October, 2016. However, the artist says he is “not sure if he will exhibit the work in Nigeria due to sponsorship. “Shows are expensive to put together to make meaningful impact,” he said. But he is hopeful that some day “I can exhibit it in Nigeria.”
Is Ehikhameno related to any of the Ogoni nine? “Yes, I believe I am related to all nine of them by nationhood.”

On the 10th of November 1995, Kenule Beeson Saro-Wiwa and eight Ogoni patriots were hanged by the military dictatorship of General Sani Abacha following a kangaroo trial that received world-wide condemnation. Ken Saro-Wiwa’s activities prior to his death and the execution have become pivotal points in the environmental justice movement in Nigeria and around the world.

"My Lord, we all stand before history. I am a man of peace, of ideas. I am appalled by the denigrating poverty of my people, who live on a richly-endowed land, distressed by their political marginalization and economic strangulation, angered by the devastation of their land, their ultimate heritage, anxious to preserve their right to life and to a decent living determined to usher into this country as a whole, a fair and just democratic system, which projects every one and every ethnic group gives us all a valid claim to human civilisation" – Ken Saro Wiwa

Kenule "Ken" Beeson Saro Wiwa (10 October 1941 – 10 November 1995) was a Nigerian writer, television producer, environmental activist, and winner of the Right Livelihood Award and the Goldman Environmental Prize. Saro-Wiwa was a member of the Ogoni people, an ethnic minority in Nigeria whose homeland, Ogoniland, in the Niger Delta has been targeted for crude oil extraction since the 1950s and which has suffered extreme environmental damage from decades of indiscriminate petroleum waste dumping.
Initially as spokesperson, and then as president, of the Movement for the Survival of the Ogoni People (MOSOP), Saro-Wiwa led a nonviolent campaign against environmental degradation of the land and waters of Ogoniland by the operations of the multinational petroleum industry, especially the Royal Dutch Shell company.

He was also an outspoken critic of the Nigerian government, which he viewed as reluctant to enforce environmental regulations on the foreign petroleum companies operating in the area.
at July 01, 2016 No comments: