CONTEMPORARY Nigerian artist, Juliet Ezenwa  Maja-Pearce, is set to present her first book to the public titled Issues in Contemporary Nigerian. The book will be officially launched on Saturday, August 8, at Yemaja Gallery, Lagos.

Maja-Pearce revealed this while addressing the press today in Lagos. Recalling what inspired her to publish the book, she said: “ The genesis of the book was the unofficial opening of Yemaja Art Gallery in 2009, when Olu Ajayi, the then Chairman of the Society of Nigerian Artists (Lagos State Chapter), casually asked the publisher, ‘so when are you going to start publishing art book?’

“From that moment, the die was cast. Two years later, the form for this book became evident to me. For a while now, those of us who are passionate about the development of the visual arts sector often find ourselves brainstorming on issues that affect us and our profession. Fortunately, the rest of the world has renewed its interest in contemporary African art, thereby creating a demand for the artistic excellence and innovation,” she said.

The book, published by Gong Publication, consists of twenty two articles, contributed by twenty artists who were selected after call for entry in 2010. Conceived and compiled by Maja-Pearce, it raises issues and questions on contemporary Nigerian art which will be discussed during the book launch with a debate titled: Defying the Parameter of Contemporary Nigerian Art.

The speakers will be Art Historian, University of Benin, Edo State, Prof Freeborn Odiboh and Tobenna Okwuosa, from Niger-Delta University, Bayelsa State. The book will be reviewed by Kehinde Adepegba. The debate will be chaired Head of Department creative Arts, University of Lagos, Peju Layiwola.
at July 20, 2015 1 comment: 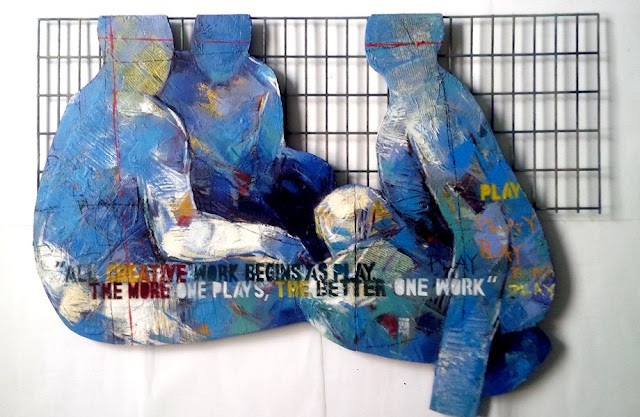 In 2001 I was informed by Ola Balogun that a friend of his (Akintunde O John) had a very large studio space which he was looking for other artists to share with, I felt it was a great idea because I missed the atmosphere of my school studio since I had graduated three years before, on my visit to the 'would be studio' I discovered that I was not the only invited artist, Ola had invited a number of other artist, and the studio itself' an abandoned factory site situated in the hearth of Ebutemeta in Lagos Nigeria. I was excited. I said to myself that it was an ideal environment for my growth... I did not need to be persuaded, so I came on board.
Within the first few months a number of the artists who joined the studio left and only nine members remained and the nine formed a group and named it Defactori Studio. I was made the first coordinator of the group. The group was made up of:  Ola Balogun, Shino Adeladan, Akintunde.o. John, Taiwo George Taylor, Awoyemi Jibade, Simian Akherebu, Ayahnu Anthony, Danmola Adepoju and Chika Idu.

Since its inception the group has organised workshops, seminars, exhibitions and we are the only art group or society in Nigeria to have made and presented an award geared towards art development in Nigeria.

All the members of the studio except Akintunde have relocated their studio space from Defactori Studio to their private studios; this is mainly due to residential distance. The group has evolved beyond geographical definition, our connectivity is our ideology. 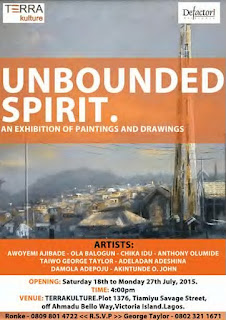 About their upcoming show “UNBOUNDED SPIRIT”

This theme represents the studio’s ideology, we believe that through these cooperation not competition, originality in expression, individualisation in technique and style, experimentation, self discovery and awareness , points our vision for the art society can be achieved.

I am interested in social and environmental issues-Uchay Chima


It would have been a terrible mistake some years back to work with medium such as fabric, iron strings, newspaper, foil, as well as charcoal as an artist in Nigeria. This has changed; art is revolving and gaining more appreciation.

New techniques and styles are emerging everyday; more Nigerian artists are now free to experiment with other medium because they know the work will be appreciated and that they will smile to the bank. Uchay Joel Chima is one of those artists who struggled against all odds to breakout from the usual medium people are familiar with to create extraordinary works with materials which people will normally call common. His reason for working with this medium Chima said he chooses to work with materials anyone can relate to. “I want to create art that can be appreciated anywhere in the world.”

In Chima’s ongoing solo art exhibition “Revisions” which opened on Friday, June 5th, at the SugarCube Building, Denver, United States of America (USA), over thirty works, featuring a selection of his recent mixed media works such as charcoal briquettes, newspaper scraps, and twine are still on view until August 28.

Sharing his experience during the opening reception with Arts and Culture Place recently in Lagos, Chima described the opening as one of his best. “The hall was filled with people, it was a massive opening,” said the Institute of Management and Technology (IMT) graduate.

The curator of the exhibition and African art historian, Janine Sytsma, described the transformation process represented in Chima’s work, where “devastation becomes the catalyst for reinvention.” Using materials from his Nigerian environment, Chima responds to various socio-political issues, from environmental disasters to social injustices. “Chima acknowledges a history of degradation in Nigeria and elsewhere, but refuses to allow that history to define the current reality,” explains Sytsma. “Instead, he imbues his work with a sense of beauty, hope, and promise.”

Chima has exhibited his work in prominent galleries in Nigeria, South Africa, the United States, and Canada. The exhibition is organised by the staff of the SugarCube Building with the curatorial assistance of Janine Sytsma.
at July 05, 2015 No comments: