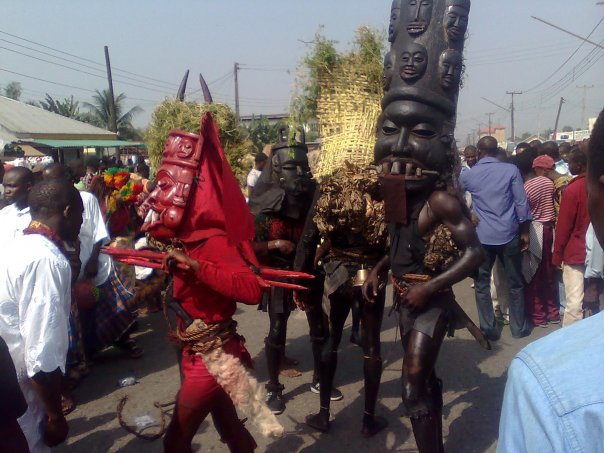 The society known as Ekpo Nyoho (or, in its shortened form, Ekpo) is the most important and widely distributed of three secret societies still active in various Ibibio towns in southeastern Nigeria. In the absence of a centralised political state, Ekpo regulated social, legal, political, and economic matters in its community during precolonial times. As instruments of social control, its masks were carved to heighten a sense of fear and mystery.

Before the advent of colonialism in the early 1900s in Nigeria, village government functioned on two overlapping structural levels; it still does so today, though to a lesser extent. The first level consists of the civil mechanism of traditional patriarchal authority. The head of the family rules his immediate household. Beyond him is the head of the extended family, who hears complaints and settles disputes between families united by ties of kinship and living side by side in the town. He is concerned with the everyday management of the community, with rules and customs governing conduct. These town and family chiefs frequently call upon elders to help decide important matters during town councils, where opinions are openly expressed.

The secret societies, constituting the second level of government, are concerned with crises and emergencies affecting the town collectively. It was on this level, devised to deal with powerful socially disruptive or dysfunctional forces, that the mask found its special place.

Ekpo Nyoho is the principal secret society in most Ibibio towns and villages. A second society, Ekpo Ekong, is active only in Ibiono, where it is of first importance. The third society, Ekpe, has been described in detail by Nair (1972:14-20). Though found in all Ibibio towns it is of first importance only in Opobo and Oron and among the Efik of Calabar and the Ogoja of Cross River State. Ekpe is also practiced in many Igbo towns, and beyond.

The Ekpo society serves as an enforcement arm of village government, though it plays a smaller role in this regard than it did in the past. It provides an outlet for youths and men to channel their energies into activities which are beneficial to the community. During the Ekpo season, which lasts from June to December, the society exerts an enormous influence on people's lives. For example, on the days when the masks come out, farming activity is suspended. Women and nonmembers cannot go to the market or perform activities outside their homes: food, water, and firewood must have been obtained in advance. When they are not patrolling the village border or assembling at the village shrine to sing and dance, society members also remain at home.Quarrels and fights are prohibited. Visitors to the village are thoroughly checked by Ekpo to make sure their missions are harmless. Stealing carries particularly heavier penalties during the season; about fifty years ago, the penalty was death, carried out by Ekpo.

Masks are used by each of the three secret societies but are most common in Ekpo Nyoho, where face masks with raffia hanging down to the waist are the most characteristic type. If a rule is violated, the chief sends masked characters to enforce sanctions. The authority and legitimacy of these characters are due partly to their established history and partly to imagery and symbols carefully manipulated to arouse fear and and to create an impression of the masks' invincibility. Without the mystique surrounding hem, masks and costumes are merely objects. The physical characteristics of a masquerade depicted in the carving breathe artistic life into the mystique.