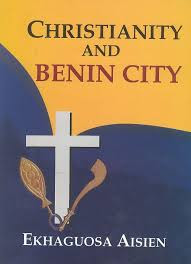 THE BENIN – IDAH WAR
The “OKUO ATTA”, as the Edos call this war of five hundred years ago, was caused directly by the first coming of Christianity to Benin. Oba Esigie had accepted to become a Christian king over a people he hoped would follow his example and also accept Christianity. The reason for his decision to embrace this religion was dictated by the prevailing internal politics in Benin at the time.  The politics was dominated by the long-standing struggle for supremacy between himself and his half-brother Prince Idubor, alias Arhuanran, the Enogie of Udo town.

The Portuguese were already in Benin at this time, as traders and missionaries. The traders rented houses from Benin City landlords, both for themselves and for the merchandise they purchased from the Edo people. They paid rent for this accommodation in the manilla and cowrie denominations of the currency in use at that time.
The missionaries in the City promised the Benin King access to European fire arms, but only if he became a Christian. This was the law. According to an Edict promulgated by the Pope in Rome, and binding on all European nations at that time. Guns, at this in history, were unknown. Or unavailable, to any of the States in sub-Saharan Africa.
The UZAMA are the Elders or the Edion of Benin Land. They are the nobles who survived from the Ogiso Period of Benin history, having been created a few centuries earlier by Ogiso (King) Orriagba, the father of the famous Ogiso Odoligie. It was the Uzama who sponsored the coming to Benin of the Oba Dynasty from Ile-Ife in Yoruba Land, three hundred and fifty years before Esigie. This time around they revolted against Esigie because of the Oba’s acceptance of the Christian religion as the State religion of the land. There was a battle between the troops of the Oba, led by the Edogun and the Isiemwenro, and the troops of the Uzama, led by the Oliha, the leader of the Uzama. It was a struggle for the soul of the nation, a struggle to decide, five hundred years ago, which God Benin would serve: the Christian God, or the collectively of Edo gods, the native divinities of the land.
This story is told in Benin forklore as the apocryphal tale of the infidelity of Imaguero, one of the wives of Chief Oliha, the leader of the Uzama.
Esigie won the battle. This Christian victory is celebrated yearly, in the Palace ceremony of Ugie Iron, which nowadays forms an item in the end of the year festivities in the Benin palace.
After this defeat Chief Oliha decided to do to the Christian Oba what his ancestor had done to the Ogiamien regime in Benin three and a half centuries earlier when he, the Oliha, succeeded in replacing the Ogiamien regime with the Oba regime; he invited an external Power, this time the ATTA, King of the Igallas, to remove Esigie from the thron of Benin, and drive from Edo land the religion of Christianity, which was a threat to the worship of the Ancestors.
Again Christianity and Esigie were victorious in the ensuing war, between Benin and the Idah Kingdom across the River Niger. It was a victory achieved with the help of the Christian guns in Benin, now commemorated as the Emuen-muen, to which a statue was erected a few years ago at the Ikpoba Slope junction of the Murtala Mohammed Way in Benin City. This second Christian victory is again celebrated yearly in the Palace Festival of the Ugie Oro in which the Oba and his Chiefs beat into silence the long – beaked ahianmwen oro, the Oro bird which, with its cries of:
“Oyao! … Oyao ! “
“Catastrophe!... catastrophe !!”
Had predicted a defeat of the Benin armies at the hands of the Idah armies. In spite of the dire predictions of this bird Esigie and his armies, which had included Portuguese personnel, had pressed on nevertheless, and won the war.
IGUEBEN town was founded in the course of this War by the Benin army, as a rear Field-Headquarters and Training camp, which supplied freshly elaborated weaponry, and newly trained recruits, to the forward army at Agenebode. (History turned full cycle 450 years later, in 1968, when Igueben town once again became a military Training Camp, supplying fresh recruits to the Federal Army at the Onitcha front during the Nigeria Civil war)
AGENEBODE waterside was also settled by the Benin army during the course of this war. The place was called Ago Enibode: “sentry Camp,” because a garrison of Benin soldiers was stationed there at the end of the war, to keep an eye on the goings-on in Idah town across the river. This was to remind the Atta to remain in good standing with Benin. The settlement might just as well have been called “Eko”, as in the historically comparable case of Lagos, or “Ogba”, as in that of the Orhionmwon territories.
The defeated Idah, “Ighan” inn Edo, subsequently enriched the culture of the Edos when the Edos imported from them some of their cultural usages. The Em ’Ighan, the “Idah drum” was imported from Idah. This drum is nowadays added to the Em ’Edo, the “Edo drum” to make up the “Em ‘Edo, Em ‘Ighan”, the complete musical ensemble of the Benin Chief whenever he goes in a ceremonial procession to the Oba Palace.
The policing of the royal Harem in Benin by eunuchs was also introduced from Idah five Hundred years ago, after her defeat. Idah supplied the personnel were handsome young men, without any physical blemishes. They were castrated in Idah and sent down to Benin, at the beginning of the reign of every new Oba of Benin, for a life time of service at the gates of the royal Harem.
Say the Edos:
Airen omwan no waa omwan vbe Ighan!
“You are not allowed to know the identity of who castrated you in Idah”
This is because the identity of the Surgeon who carried out the castrating was always scrupulously kept hidden from the victim – to prevent a subsequent revenge attack on him by the castrated young man.
These Harem Eunuchs were called Okpe or the Oruerie n’oguan


Excerpt from: Christianity and Benin City by Dr. Ekhaguosa Aisien