Ayodele Ukana is an enigmatic artist in Nigeria today, though not known by many in the Nigerian art scene. Ukana creates sculpture, panels and paintings tied deeply into African (Nigerian) themes, yet which are informed by a post-modern awareness.


He is always looking for new grounds to conquer in his quest of fulfilling an inner burning desire of unleashing his talent.  These had made him to be known by different names by those who had the privilege of collecting and owning some of his pieces, be it metal, terracotta, and wood, etching on metal-foil or Paintings. To him, he is first an Artist who chooses whatever medium to express himself and interpret his ideas. 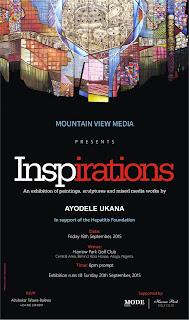 18, at the Harrow Park Golf Club in Abuja; entitled 'Inspirations'. He draws inspirations from all things around him; from his childhood growing up in Northern Nigeria to present day Lagos, as well as the happenings in the society. Art lovers will find his works a breath of fresh air and his attention to detail is magnificent.

When you look at his paintings or panels or his sculptures, you can see the traditional African elements, but at the same time he is talking to a modern world, especially young people. So you will see scenes showing the lives of young people in various parts on Nigeria, illustrating the reality and the politics behind Africa's situation in the world.
He shows the balance between what leaves Africa for the rest of the world and what is coming back. This is a vital part of the modern African story.

His works also tell our history and culture as Africans. One of his masterpieces Argungun depicts the energy and euphoria of the world famous Argungun Fishing Festival held in Kebbi State, while Tales by Moonlight shows the richness of Nigerian folktales. Ukana's expressive wooden panels show his relationship to his northern upbringing and faith. His recent expressive use of the bottle covers is second to none which he uses to continue his story-telling.

Ukana was born in 1968 in Lagos. He is native of Ibeno, Akwa-Ibom State. He has been practicing for over 20 years. He had his first group show in 1992 at the National Museum
Onikan, Lagos. He has also participated in series of group art exhibitions, and a solo show at the Didi Museum, Lagos, in 2012 and had his last show in a group exhibition titled Lagos Hustle and Hope at the Rele Art Gallery, Lagos, in March this year.
at September 17, 2015