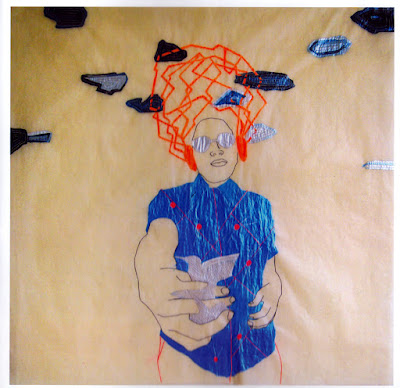 
For more than two years Amanze and Ogunji through numerous written exchanges, have maintained an ongoing conversation on their processes and love of drawing, and their parallel experiences of moving through the world as hybrids. With Magic Amanze and Ogunji share a glimpse into this conversation, with new drawings on paper and collaborative, site-specific drawing performances.

Amanze’s Aliens, Hybrids and Ghost; is a series of drawings that began as a way to make language for the experience of navigating multiple cultural identities. This story gave birth to a world inhabited by beings who thrive in their hybrid skins, which show what it is to live between and within many countries, cultures, and languages.

Ada the Alien, Audre the Leopard, A Black Eyed Pea Constellation, Twin [a headless duo], Pidgin [appearing on the page as a pigeon], and Merman (half-human, half-fish) are a few of the beings who dwell in this visionary landscape.

Ogunji’s practice extends between drawings and performance-based work. Her drawings, made on whispery architectural paper, reference a tracing and claiming of a city [Lagos] and the daily interactions, or rather vibrations and frequencies that occur. Characters, such as Soundman and running cheetahs, move effortlessly in and out of an unknown world and time, yet feel quite at home in their interaction with orchids and generators, Ife heads and gems. 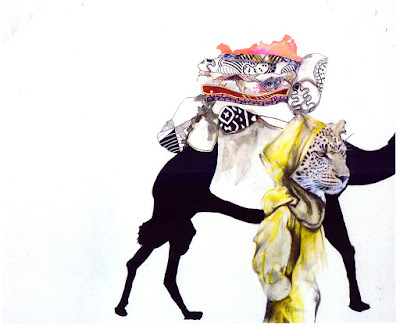 Through performance, Ogunji often engages the body in highly physical, yet subtle, endurance and time-based work that explores the residue of a body’s marking, and therefore assertion into public domain.

Amanze and Ogunji’s drawings re-think the notion that displacement equates to loss or fragmentation. Instead, their transcontinental existence and the inevitable hybridity that forms as a result, becomes a source of expansion; an amplified view of not just the world we know, but a portal into the vastness of other worlds. The physical openness of the paper space, coupled with their choice of materials and processes—the thin line of thread or graphite, the wateriness of iridescent inks, the translucency of photo transfers, the acute physicality of their performances—speak to the fluidity, impermanence and constant reinvention that a nomad, hybrid or transnational might require.

Through Magic, these individuals conjure quasi-human creatures, expansive landscapes and surreal abodes as a new language for a universe in infinite flux.

While Wura-Natasha Ogunji is a performance and visual artist who works in a variety of mediums, she is best known for her videos, which she uses her own body to explore movement and mark-making across water, land and air. Her current performance series entitled 'Mo gbo mo branch/I heard and I branched myself into the party' explores the presence of women in public space in Lagos, Nigeria.

She has received a number of awards, including a John Simon Guggenheim Memorial Foundation Fellowship (2012) and grants from the Idea Fund, Houston (2010), and the Pollock-Krasner Foundation (2005). She has performed at Centre for Contemporary Art (Lagos), The Menil Collection (Houston) and the Pulitzer Foundation for the Arts (St. Louis). Ogunji received a BA in Anthropology from Stanford University, Palo Alto, CA, in 1992 and a MFA in Photography from San Jose State University, CA, in 1998. She lives in Austin and Lagos.