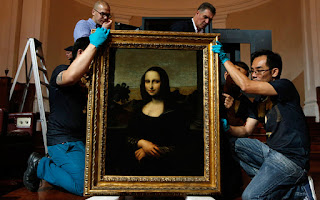 Researchers from a British university believe they have unlocked the mystery of the Mona Lisa’s famously enigmatic smile – by analysing another, recently-discovered masterpiece by Leonardo da Vinci.

By looking at La Bella Principessa, the portrait of the daughter of a Milanese nobleman, researchers found intriguing clues as to how the Renaissance genius managed to paint the Mona Lisa in such a way that her coy smile appears most pronounced when viewed from an angle and less so when looked at directly.

The researchers, from Sheffield Hallam University, believe that in the case of both portraits, the same effect was created by a painting technique known as “sfumato”, meaning soft or pale in Italian, in which subtle colours and shades around the mouths of the subjects create a clever optical illusion.
If one focuses on the eyes of the subject, the lips appear to slant delicately upwards in a tentative smile, but if one looks at the mouth directly, they appear flatter.

In both paintings, Leonardo expertly exploited differences between