In Argentina, Where Culture Is 'A Right,' A Free New Arts Center Opens 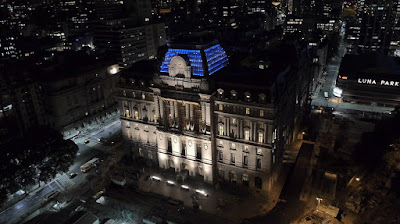 A new tourist attraction in Argentina — The Centro Cultural Kirchner in downtown Buenos Aires — has been posting some impressive numbers since it opened in mid-May. As many as 10,000 patrons a day are trooping through an ornate, turn-of-the-last-century building that has been converted into what's said to be the fourth-largest cultural center in the world. Remarkably, everything in it is free, from video installations to comedy acts to symphony concerts.

They call the main concert hall La Ballena Azul, "The Blue Whale," and it swims inside a grand Beaux Arts palace where, for most of the last century, folks in Buenos Aires mailed letters: the former Central Post Office. The Blue Whale auditorium — blimp-shaped, three stories high, holding 1,750 people — floats in what used to be the package-sorting area.

Why "floats"? Because the subway runs nearby, says guide Federico Baggio. "So the vibrations would not enter the symphony hall. It ended up having a whale shape, so that's why they named it like that, but the purpose is acoustics http://n.pr/1LbeTUc
at October 08, 2015