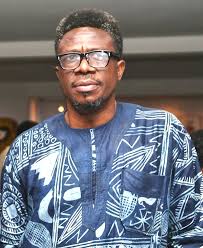 Although he died in January this year; artists, art patrons, loved ones and art lovers are yet to get over the untimely death of Ben Osaghae. However, what is unclear since his demise is what cut short the life of the artist in the prime of his career?
A reliable source told Arts and Culture Place that the artist was ill for a while and only those very close to him knew about it. The source refused to disclose the name of the ailment, but revealed that the artist "survived by no child or wife."

Former President, the Society of Nigerian Artists (SNA), Kolade Oshinowo, who was at an event put together for the late artist by members of the Guild of Professional Fine Artists of Nigeria (GFA), has this to say: “A lot of us didn’t know that Ben was ill. I didn’t know. I saw him in September. In December he was at my show and I didn’t know that something was wrong. It was when he died that I started to hear some of the health challenges that he was going through. But he handled it so deceptively that you will not know, but those who are very close to him knew about it. it’s unfortunate.”

Oshinowo said one question which no one asked during the tribute was what lesson has been learnt from the death of Osaghae? “When I was the president of SNA, I have always raised the issue of artists paying attention, not only to their studio practice, but they should pay attention to their finances because if your finances are in distress it will affect your creativity. They should pay attention to their loved ones, their wellbeing, especially their health. The tendencies are that we all get consumed with the practice that you forget check up and looking after ourselves.”

The renowned artist said he will miss the artist’s commitment and focus to the art. “He was very serious professionally. He was a serious professional. When there is an art gathering you will see him there. Even though he is a bit on the quiet side but you will see him making contributions and sometimes you see him at every exhibition. That is the attitude I tried to encourage in all artists.”

Meanwhile, art lovers, collectors, friends and his colleagues turned out in large number on Thursday, at the National Museum, Onikan, Lagos, Nigeria, to pay their last respect and give accolades to the artist, which they said his absence in the art scene would be greatly missed.

Present at the function was his Royal Majesty, the Obi of Onitsha, Igew Afred Nnemeka Achibe, a friend of the artist and a collector of his works. Achibe advised Nigerian artists to be their brother’s keeper by establishing an organisation which would render help to any artist distress.
He said this can be achieved through contributions by artists, which he said he would play his part once the organisation is founded.

The event tagged: An Evening of Tribute to Ben Osaghae; was an emotional one as many poured out their hearts while paying their tributes to Osaghae, and they acknowledge that Osaghae had indeed made indelible imprints on the sand of time, and his works and contributions in the Nigerian art sector have enriched the history of contemporary Nigerian art.

Olu Ajayi, who anchored the programme said the artist will be missed for many reasons. But as a painter his bold brush strokes, choice of colour, idiosyncratic style and artistic ability to provide social commentary through his art will, perhaps, be the most enduring gift he has left us to savour, enjoy and think about.
Ben Osaghae was born on June 23, 1962 in Benin City, Nigeria, where he had his primary and secondary school education. He studied General Art at the Auchi Polytechnic and graduated as the best student in his class in 1986, earning the Rector’s Award for Excellence. After  graduation, Osaghae taught painting, drawing and art history at his alma mater between 1990 and 1995. He later moved to Lagos where he became an active full time studio artist.
He passed away on Tuesday, January 17, 2017, at the age of 55, leaving behind a permanent print on the Nigerian art scene. He was a member of the Guild of Professional Fine Artists of Nigeria.
at April 02, 2017