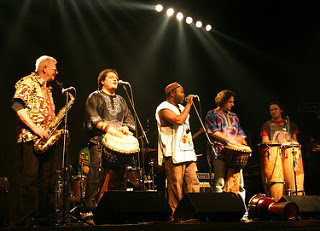 The legendary Ikenga courtesy of Quintessence will be performing live at Quintessence Gallery, Park-View Estate at Ikoyi, Lagos, on Sunday from 5-8pm. Ikenga will be performing the waterside session – The Confluence of African Rivers, and it will feature live and unplugged folk guitar music from Nigeria, Ghana, Congo and Cameroon from 1930-1970.

The event is a Charity Concert for the Eruobodo House Orphanage and it is free to all African folk guitar music lovers, it will feature veterans of some Africa’s greatest bands such as Papa Tino Batangisa, a vocalist/saxophonist from the Democratic Republic of Congo, who used to play for Tabu ley Rochereau, Abeti Massikini and Ras Kimono; Oscar Elimbi, a Guitarist/vocalist from Cameroon, who has played for Manu Dibango, Onyeka Onwenu and Tony Allen/Damon Albarn; Ed Keazor, a Vocalist/Guitarist who formerly played for The Funkees, Fatai Rolling Dollar and Dele Sosimi Afrobeat Orchestra; Eddie Offeyi, a Drummer/Vocalist and former member of the Professional Seagulls, Headzfunk and Christie Essien's Goldtrain Orchestra. 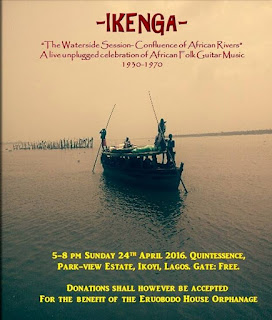 The band shall be performing the music of African Folk Guitar legends, such as Justus Domingo, Irewolede Denge, Essien and Tagoe, Joseph Wendo Kolosoy, Kwame Asare, Israel Njemanze, Julius Araba, Okonkwo Adigwe, Sally Young, Ambrose Campbell, Kwaa Mensah, Dikoume Bernard and many more.
African folk Guitar music was the arrowhead of the creation of a hybrid form of modern popular music in Africa, upon its introduction by Spanish and Portuguese Sailors, in the 19th century and latterly by European soldiers during the World Wars. It was adopted by African pioneers in the early 20th century and the fusion of Latin Guitar and African rhythms and it gave rise to several genres, notably Palmwine Guitar and Highlife in West Africa, Soukous and Afro-Rhumba in Central Africa and many more.

Quintessence is hoping to relive the wonderful music experience and at the same time will accept donations for the benefit of Eruobodo House Orphanage.