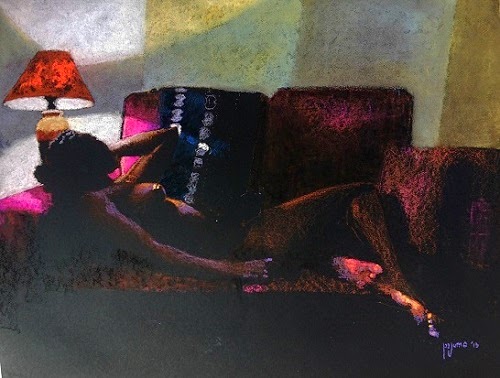 No fewer than 20 fascinating paintings are currently on display at the Moorhouse, Ikoyi, Lagos. An art exhibition by Olusegun Adejumo, titled:  Le Festival Des Reves (The Festival of Dreams).

Entering the exhibition hall, you cannot but notice the attention getting pastel paintings of nude young ladies in their early and late twenties. This reported was tempted to ask the artist what inspired the nude paintings.

In his words: “Every woman has something in her that will make you to desire her and for a lot of artists, you either paint her or you chase her. We (artists) spend a lot of energy to depict that which we desire in our work. It is the same energy that goes for both (the artist and the model).”

However, Adejumo didn’t title the nude works with the names of the models “because of the society we live in, they (the models) might be a little shy to show their selves.”

Definitely, a lot of conclusion will be made by the viewer and the collector, regarding the nude work which is in series.

Other works on display are: Sitting Pretty, Gisting, Model Mussing, Fatoumata, The Wolof Woman etc. Artists being good story tellers, Adejumo told the audience a wonderful story at the opening reception of the exhibition which inspired this painting; titled: The Wolof Woman.

“The women from Wolof are very enchanting, they wear waist beads, the waist beads are not just ordinary, and they are made from coconut shell. The women soak it in sort of perfume, something like ointment, for a month or two before wearing it. When the women wear the beads, you could passive the fragrance but you cannot tell which part of their body the fragrance is coming from…which part of her body the perfume is coming from, so you are enchanted by the smell.”

The artist said the Wolof men who visited his other studio in Dakar, Senegal, told him the story.  And he decided to document the story on canvas. The painting is a face of a girl, “something mystical and hazy.”

Adejumo said he is dedicating the 20 works to women in honour of this years’ International Women’s Day, which was on Sunday.
Le Festival Des Reves opened on Saturday, March 7 and will run for two weeks. The exhibition is being supported by Alliance Françoise, Lagos.