Imperial exploit of Great Benin - We are not part of IPOB 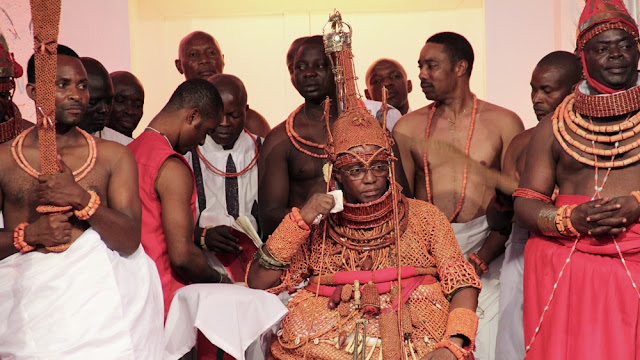 We all are aware of the imperial exploit of Great Benin Kingdom under the sole might and leadership of the Oba of Benin, who before the unfortunate pre-planned episode of the British expedition in the year 1897 was an independent country of its own. Before our sovereignty was lost, that status of a country lasted for about 1,900 years starting from the first recorded King of Benin, Ogiso Igodo in the year 40BCE to the last independent king of Benin, Oba Ovonranmen. In spite of that unfortunate episode the Benins have continually maintained the status of being great people even in the midst of tribes who ordinarily were no match for us before our independence was forcefully taken away by the British and bestowed on those who once dreaded our might.


The act of expansion of our kingdom started in the era of Ogiso Odoligie remembered to be the first warrior king of Benin, five centuries later Oba Ewuare I redefined the whole concept of imperialist approach and further expanded the kingdom into an empire. The Benin kings are remembered to be landed warriors not until the reign of Oba Orhogbua trained in the maritime school as well as a catholic priest in Lisbon, brought a whole new idea of expanding his empire through the water ways conquering and establishing many towns along the transatlantic line of Nigeria, now called Bight of Benin. Some of these communities where conquered while some where founded along this successful venture of Oba Orhogbua, most prominent amongst these towns owned by the Benins is Eko (Lagos), it is our, ancestors who founded and named that land and was never conquered and as such the ownership of Lagos is never in dispute only misconstrued; in few months’ time it shall be reviewed. 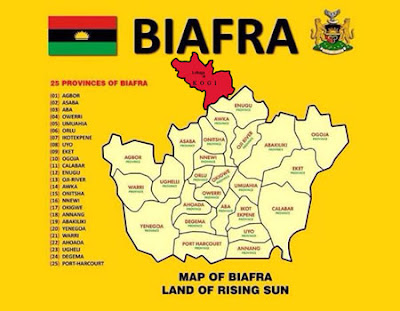 The concept of a larger empire like the Benin has its own deficiency of losing some of its aborigines to other places within and outside the territory of the empire. The act that saw different modern ethnic nationalities, who are of Benin origin scattered to different parts of present day West-Africa most especially Southern part of Nigeria. It is in the knowledge of getting to know that about 1/10th of the entire ethnic nationalities in Nigeria are of the same ancestry with the Benins of the present day Edo people, that led to the creation of this group in prospect of having a common ground to unite all Great Benin descendants all over the world.
Since the inception of this group we have identified over 36 ethnic nationalities or clans who have enthusiastically traced their roots to Benin, for purpose of time we will hurriedly mention few of them: Esans, Etsako, Owan, Ekpeye, Ogba, Epie Atisse, Iwurhuohna (Ikwerre), Ogbia, Igede, Ikare Ekiti, aborigines of Eko, aborigines of Itagbolu, Ezechime descendants of the western Niger Delta/Onitsha people, Oguta, Urhobo, Isoko, parts of Itsekiri people, Degema, Benin people in Benin Republic, Togo, Ghana and  as far as Guinea, amongst several others. It is in this knowledge that we are pained of the injustice done to us by the British and we were the last true resistance to their plans, without our defeat Nigeria as a country wouldn’t have existed by 1914.
GBD is a forum therefore, for uniting the descendants of this Great Empire. Haven briefly established the mandate of our group we can now proceed to the business of today.
We have followed the agitation of the Independent People of Biafra (IPOB) under the leadership of Nnamdi Kanu and we have no cause to be against their agitation neither to be in support of, as we believe that every ethnic group has the right to pursue their independence. However, we completely frown at the statement credited to Nnamdi Kanu about a week ago that South-south region of Nigeria is part of Biafra. The statement is an aberration to both pre and post-colonial history of Nigeria, we wish to ask at what point in history did Igbos own South South region? Is it in the days of the imperial exploit of the Great Benins? Or during the time the British amalgamated them and gave them a name and an identity as a people? History easily remembers that the term Biafra is a borrowed word of a Portuguese colony in present day Cameroun and a supposed seceding nation will have to borrow a name that is foreign to them, we do sincerely hope that Nnamdi Kanu should be properly lectured about the history of the pre – colonial era of Nigeria. 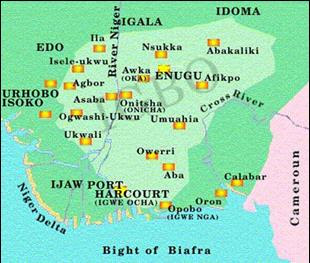 He should be taught how the Benin people and its descendants controlled this whole region of South South, part of South East and South West and that it took the British to cut off our power and gave it to some selected few of which the Igbos are the biggest beneficiary otherwise people like Nnamdi Kanu wouldn’t have the effrontery to place all this older ethnic groups, who have been in these places for more than 5,000 years under the wings of a group that is purportedly claiming to have come from Israel about 2,000 years ago. Hence we wish to warn the IPOB and their supposed plan that no inch of South South vast and rich land is by any standard of intellectual and historical argument theirs and we will not hesitate to engage in an intellectual debate on this said matter at their convenient date, time and venue, as we are non-violent group, who believe in the principle of intellectual engagement.
We wish to announce to the whole world that the Oba of Benin is a king like no other and as such he deserves a place in our hearts at all times, in Benin it is a common saying that “Oba ore Edo, Edo ore Oba” translated as “Oba symbolizes the Edo people and the Edo people symbolize the Oba” it is a two way phenomenon like the concept of two sides of a coin. The Benin king and his people goes beyond mere bond but shielded in the mix of history and as such the lucid inseparable fellowship of oneness like the theological concept of Trinity. For the purpose of this conference let me refresh our minds a bit, historically.
The Benin Kingdom is the Oldest surviving Kingdom in Africa and second in the world, spanning a period of 2055 years since the first king of Benin in 40 BC, 31 Ogisos reigning in a period of 854 years, with a joint interregnum of 355 years and 40 Obas of Benin reigning in a period of 846 years and counting, which amounts to 71 kings seating on the revered throne of Benin, we were the very first known civilization in this part of the world that confounded the earliest Europeans, with amazing scientific breakthroughs in the field of metallurgy, developing complex societies of impeccable organised traditional and political system, inventing the first family identity technology using natural creativity of Morning salutation, an advance national identity concept of the IWU marking, a precise architectural pattern of high geometric calculated system, creating a defence around the capital through the construction of the Great Benin wall (recorded to be the greatest archaeological feat in the world before the mechanical era, Guinness book of record, 1986) inventing Street lightning, running a banking system about 700 years before the Europeans came to this part of the world, using bronze casting and ivory carving as an imagery to pass our history to future generation liking to modern day libraries.
These are few amongst thousands and the very essence of this whole magnificent civilized people bothers around their King, the Oba of Benin. Centring our thoughts around these awesome accomplishments it is only wise to at all times show great respect to our revered monarch which inherently is to ourselves. We plead to all Private and governmental institutions in Benin owned territory within and outside the modern scope of Benin Kingdom for a portrait of the Oba of Benin to be hung on the wall and as well in our private homes, this is not a must but a show of solidarity to the greatest kingdom in the world. Oba gha to Kpere. Ise. 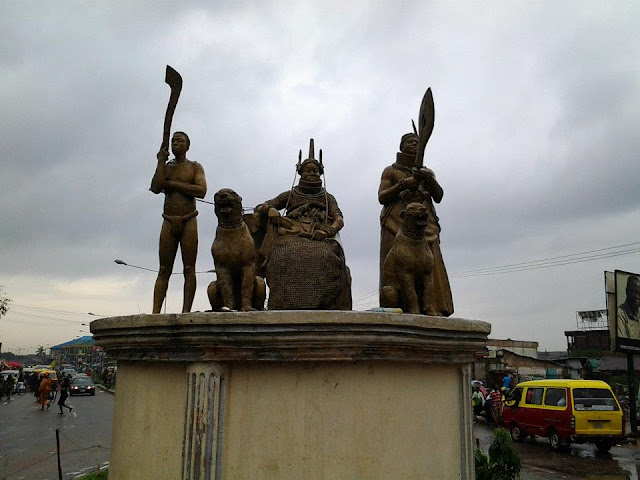 In the past one year we have patiently watched our neighbours who we accommodated as our tenants long time ago in our lands because of our high level of hospitality, which has later turned against us, they vilify us and our revered Oba and we have maintained so much decorum; and we have been threatened in our lands by those who have no historical nor legal claim to any parts of Edo land. We wish to notify these sets of misguided Ijaw people that no single man has a monopoly of violence and for the fact that we are non – violent that is why we are mild in our response to them, as other Benin group will react at the appropriate time. However, we might have abandoned our way of violence after the unfortunate episode of the year 1897 but we have not lost it, maybe a little refreshing of the minds of these modern Ijaw youths in our lands should be appropriately done by their elders about who the Benin people were, and still are. Certainly it could make them have a re-think of not waken up a sleeping lion.
In the past few weeks we have watched a few of our Benin people in disdain of their unguided statement to the revered monarch of Benin, and as such we wish to alert them that they should desist from such uncommon practice in our lands and we wish to notify them that there are avenues of channelling their pains to His Royal Majesty in a more coordinated manner. Consequently, GBD will no longer tolerate any person seen using social media as a tool of committing abomination against the Edo traditions as we have sworn to uphold the very socio-cultural values that bind our people.
In conclusion; the modern Benin people is in the shadow of its former exalted self, and every passing day we drown in the guilt of not realising how long we have played second fiddle to other neighbouring ethnic groups, we have mourned enough of what happened to us about 120 years ago, we must dust ourselves up and begin to start seeing the possibility of walking on the paths of our heroic ancestors, Great Benin and its descendants are too great to have been shelled in the cocoon of unprecedented obscurity, we must rise up and take our place in the present affair of the country and the world. A place where we truly deserve and we cannot do it by being divided, hence a need to come together as one and equal people, the Great Benin descendants must unite as one indivisible entity and together we shall return back our lost glory; which is the cardinal focus of GBD, uniting all Great Benin Descendants all over the world as a tool to take our rightful place in the affairs of the world.
At this point ladies and gentlemen, it is no longer a coincidence nor a mere choice, but a right of a 573 years old prophecy that we will lead the next intellectual revolution that puts Benin back in the world atlas by the power of God and our ancestors.
God Bless Great Benin people all over the world, God Bless our Nation that will be reborn. God bless our Revered Monarch…Oba gha to Kpere. Ise.
Press statement delivered by the Coordinator General, Great Benin Descendants Worldwide, Imasuen Amowie Izoduwa, on November 3rd, 2018.