Why Dotun Popoola’s sculpture was destroyed 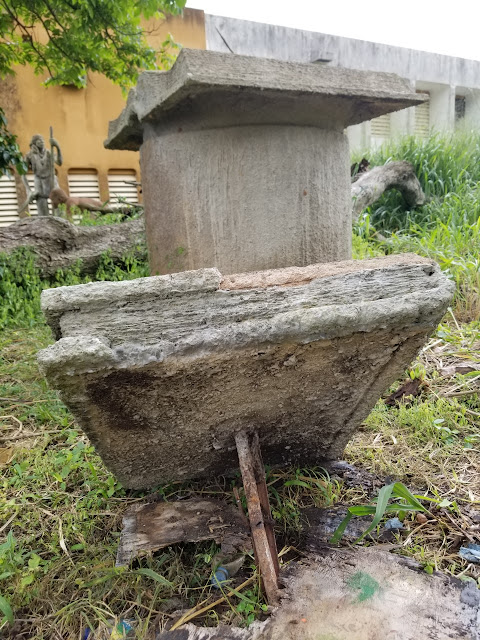 Visual artist Dotun Popoola has expressed anger at the state of a sculpture he created 10 years ago as his final year school project at the Obafemi Olowowo University (OAU), Ile-Ife, Osun State. 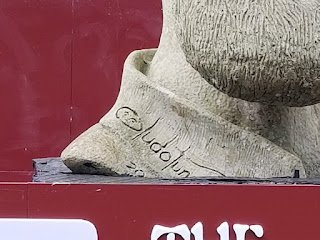 The sculpture is a 15ft portrait of Prof Wole Soyinka, which is erected on the ridge of the recently-opened Wole Soyinka Museum at Ile-Ife. The artist said the piece was originally placed on three books that represent poetry, prose and drama, which gave Soyinka his Nobel Laureate Prize. The intellectual aspect of the artwork is damaged, he said at a press conference in Lagos.
Popoola said he had no problem that the sculpture had been taken to the museum, but that the front of the piece was removed, his signature and the date of execution cut off. 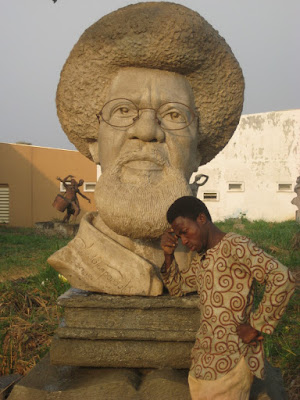 “What I saw brought tears to my eyes. The painful aspect of it is that the head is placed on the ridge of the museum. I’m happy that the school authorities considered my work, which is one of the reasons I immortalised Baba Soyinka. Now, cutting off the book, destroying the base of the work made me feel like the work was relegated from a monument to a mere craft.
"What made him a professor are the books that he read. The head is useless without something inside the cranium. I just want art to be valued the way it should be; the way they taught us in school," he said.
The artist, who just came back from a three-month residence programme in the US, said he was shocked when he saw the image of what has become of the work on social media. He described the act as ”a monumental embarrassment, an assault on my intellectual property. But, in a way I want to sound like a trained child who was actually trained by a father and when my father offends me, I want to be very cautious in the way that I tell him that he has actually offended me”.https://bit.ly/2wKyFcz