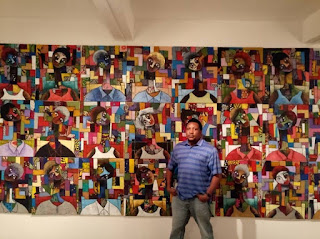 New No Nigerian Conjunctures is the title of George Edozie’s solo show which opens tomorrow for the public at the National Museum, Onikan,, Nigeria at 4pm.
The show which would be his sixth solo exhibition will feature seven large size paintings and three giant sculptures. Works, such as Last consignment to Lampedusa and The sojourners focus on the second slavery many Africans have subjected themselves to voluntarily of late. Last consignment to Lampedusa (an island in Italy) is a 30-in-one painting showing human images cramped together in compartments like bottles of drink ready for shipment to Europe either via the Mediterranean or desert.
For Edozie, he is using the painting to ask what is responsible for this trending unholy migration to Europe while at the same time blaming it on the aging of African leaders who are ineffective in curbing the menace in their countries. 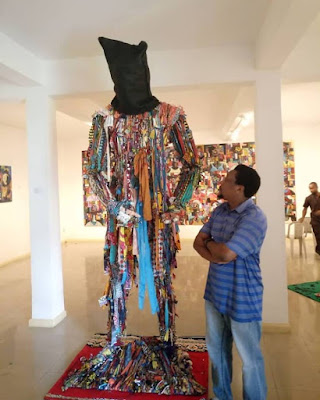 “Unfortunately, African governments are not looking at the causes of this migration. They merely talk about it. So am using my art to ask why this movement? Interestingly, African leaders are the most powerful in the world, yet we fail as a people. To me, the migration is becoming fashionable because of the aging of our leaders who are at the departure lounge,” he said.
Other works include Dinkpa (VIP), a 12-foot tall fabric sculpture the artists shows a full blown macho-man, Ikpoku chi and Obinka, fabric sculpture. Ikpoku chu 2 is a two in one piece (mixed media on canvass) that is dominantly blue and red painting of abstract figures.
The artist revealed that the exhibition which will run from September 5 to 14 exhibition will be opened by Igwe Nnaemeka Achebe, the Agbogidi, Obi of Onitsha.
Edozie studied Fine and Applied Arts at the University of Benin, Benin City where he majored in Painting and graduated in 1996 with a BA Hons, Fine and Applied Arts. His last solo exhibition titled Shifting the Paradigm hosted by the Museum of Contemporary Art North Miami Florida, US A, was listed among the 4 best exhibition at the Art Basel Miami 2014. His sculpture Okpulu (Grandma’s Basket) is a permanent collection at the Museum of contemporary Art North Miami. His works were recently acquired by Indianapolis Museum and Studio Museum of Harlem New York. He is also the co-author of the book 101 Contemporary Artist, A Celebration of Modern Nigerian Art, one of the first recent document on Nigerian Contemporary Art published in 2010.