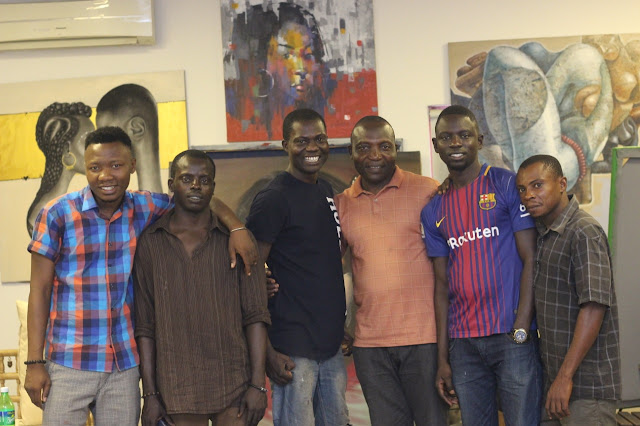 “Alexis Galleries is happy to officially announce the maiden edition of its artists in residency, which began on Monday, May 14, 2018,” says the gallery owner, Patty Chidiac-Mastrogiannis, during a media chat which took place recently.

According Chidiac-Mastrogiannis the residency aims at promoting artists from across Africa and African Arts. In this maiden edition we have six artists; from Ghana, Ibadan, Abuja and Lagos. The one-month programme will end in June 14, 2018 and the works will be exhibited in October this year.
She says they plan to organise residency for six artists every three or two months in the year. “We are trying to see how we can put the artists on a greater pedestal with our residency programmes, workshop and lectures. The gallery's line-up is hand selected with the utmost care and features emerging and established artists, who come from within and outside Nigeria, providing diversity in content, perspective and style.”
The artists she revealed are Prof John Oyedemi, Samuel Tete-Kancharn from Gahan, Oyelusi Olasunkanmi, Olorunyemi Kolapo from Abuja, Sunday Effiong and Oluwole Omofemi from Ibadan.
ABOUT THE ARTISTS
John Oyedemi graduated from Ahmadu Bello University Zaria B.A., M.F.A. Painting, PhD. He has been practising for over two decades. His paintings are based on exerted daily human activities captured in warm colours, juxtaposition of grey and colour culminating into dynamic movements on canvas.
It chronicle’s the challenges of urban and social realities. The paintings are imbued with much gestural energy to portray thoughts of the moment of the artist. The subject represented are Market scenes, Lagos Yellow buses, Polo and Durba from the Northern part of Nigeria rendered in an impressionistic tradition and textured with palette knife to create a tactile effect on canvas.
“I was fascinated by the potential possibilities in subjects of interest to me and the realiSation that my quest for exploration can be sustained to communicate a specific story.”
Olorunyemi Kolapo is a graduate of Pure and Applied Physics from Kogi State University, he’s a full time studio artist and a self-taught artist from Kogi State.
Kolapo is a crowned Artist of the week in AFRO-MEDIA ART (Kenya) on the first week of December 2014. Host a yearly solo art exhibition called smART (sentient multimedia art) EXHIBITION since 2013. He has participated in local and international exhibitions such as the New York Art Expo 2018 edition.
Obadiah is an Abuja-based multi-media artist. He has various awards such as Best artist of the month - Afro- Art media 2015; winner- Art battle Africa 2017.
Tete-Katchan was born in Vogan, Togo and he currently resides in Accra, Ghana.  Upon completion of his secondary school education, he chose to pursue a career in the Arts to express his kaleidoscopic vision of the world.
He underwent his apprenticeship in 1997 at the studio of Mr. Joseph Amedokpo, studying and developing his own style from the ‘Oshogbo Art' from the South West of Nigeria.
For Samuel, the world is a stained-glass window where colour assumes the same meaning as forms and symbols, masks and motifs; all merged together depicting the need for a better world. In November 2005, the Spanish Embassy of Ghana exhibited this series of work at Goethe Institute.

Omofemi is an accomplished visual artist.  Born in the late eighties among the rusty-roofed dwelling of the ancient city of Ibadan, he had his National diploma and Higher national diploma in fine art at the polytechnic of Ibadan. He has participated in many group exhibitions both locally and internationally. 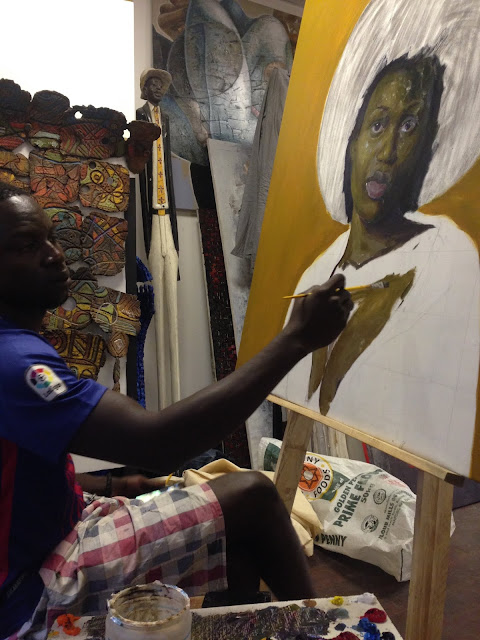 Omofemi's works frequent resonates with a deep appreciation of African fashion, rediscovery of forgotten style and afro-centric pride. He is a member of the world touring art group 'Coure de Diona' based in Italy.  He enjoys expression in acrylic and oil paint which are his media for vibrant expressive creativity, and his works are widely collected in Nigeria and outside. He aims to deploy the influence of visual art to better the lot of children and revived the neglected beauty of African fashion. Olasunkanmi was born in 198, Lagos State. He had his early education in Lagos and higher education at the Auchi Polytechnic, Auchi, Edo State in 2013. He graduated with a Higher National Diploma (HND), upper credit in painting from the same school. He has participated in various art exhibitions within and outside Nigeria.  His works on faces in impressionism because he doesn’t know them as they are beautiful faces that why I used bright colors on them. My landscape painting: I worked with my environment and what I seen. Effiiong was born on the 10th may,1984. He trained under the auspices of metal sculptor Odogwu Fidelis at the Universal Studios of Art in Lagos, Nigeria.
A full time studio artist. He has executed some commissioned works around Victoria Island and Ajah, Lagos State.
In eight years, Alexis Galleries have engaged in the presentation and dissemination of contemporary art in the media of painting, drawing, mixed media and sculpture. We have established ourselves rapidly as one of the best galleries in Nigeria, a meeting place for artists, collectors and enthusiasts of art.
We have supported artists in organising and showcasing their works and talents through numerous exhibitions, as we desire to take the Nigerian artists to greater heights in strengthening the ever vibrant Nigerian Art Circle. Support of local artists, not only getting their works exhibited in our gallery but also grow their careers and help promote their fascinating and important projects.
at June 12, 2018