Waliyah Drops “Rumour Has It” 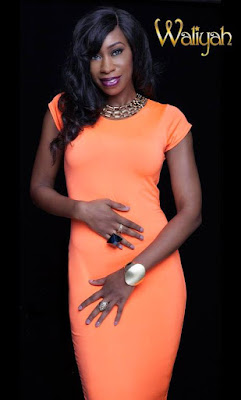 UK based Nigerian born sensational pop singer, Waliyah  Adetokunbo isn't new in the music industry, she has been writing songs for over six years. In 2011 she headlined a sold out concert in London's Jazz Cafe which she organised and promoted herself.

The light skinned diva who's from Ogun State is not just a pretty faced musician, but an intelligent damsel and Chemical Engineering Masters Degree graduate with a past career in investment banking. She just dropped a hit single, titled 'Rumours Has It'. The newly released hot single "Rumour has it" which was produced by TK is already gaining good radio play, while the video was shot in London few days ago.

Expressing her excitement as she plans to return to Nigeria in few weeks’ time, Waliya hinted that she's ready to take over the Nigerian music industry with her unique style of music and vibe."I have been shuttling the music scenes of Lagos, London and LA for a while now. Then I also attended music writing seminars with Pharrel Williams and other world famous music stars. Within these few years, I have explored, learnt and had great opportunities; it’s been amazing all the way.
“My next plan is to come home to work with more of Nigerian finest producers. So far I have worked with Sarz, Tee Y, K9 (kokoma), Sam Klef and TK. Music is my passion and also what I live for it. I really have a lot in stock for my fans out there," she assured.

Armed to the teeth to make a remarkable difference in the music industry worldwide, Waliya has been working on new quality materials which would be released one after the other.
Her CV boasts of an Olympic approved song, "It's Time", was produced by Patrick Leonard, a Grammy Award winning super producer, known for his famous work on mostly on Madonna.
She released her first afro-pop single "Ejekajo" with a listening party in November 2012 under her own record label.
Waliyah has supported stars like Tuface aka 2baba, Nnkea, Tiwa Savage, Omawunmi, Waje at prominent music events in Lagos and London, also supporting D'banj and Davido at boat club NYE, performing at the Ovation red carol, Rhythm Unplugged, Boat club new year eve parties, Dj Jimmy Jatt's Lekki block party to name a few.
at November 25, 2015