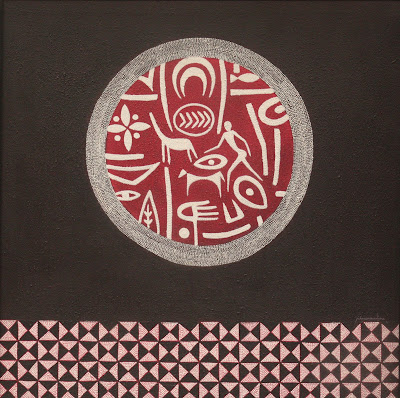 "Often times we see one’s fall begin when he/she gives room to animality, indolence, impurity, corruption, and confusion of thought. The body is in high quest for earthly desires. The lack of self-control over these desires often paves way for one’s fall. One must master his/her body and have control over it. The control of the body begins with the control of the mind and the thought therein. Thoughts become habit and habit breed circumstance. To live a life of self-control, resolution, purity, righteousness, and well-directed thought will aid one to ascend to heights of spiritual and moral zenith.

“In Be thy Brothers Keeper 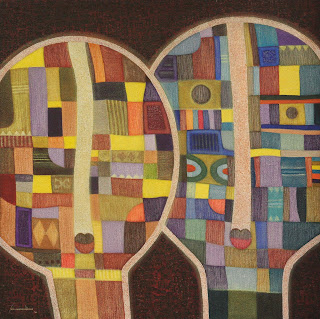 I investigate and question religious intolerance, violence, terrorism, and xenophobic tendencies. Man is a creation of one God no matter what religious, political, cultural, and racial affiliations one may choose to have. Religious tendencies purports that each one has its own supreme God. There cannot be several supreme Gods creating the same mankind. Therefore, can God say to a being: “kill the other being I created because his/her mode of worship is different or wears a different colour of skin?" said Johnson Uwadinma.


About the Artist
Johnson Uwadinma is a contemporary Nigerian artist known for his paintings that feature tessellating hues and multiple textures. Uwadinma’s work is characterised by an interest in truth, morality, memory and the never-ending intrigue of human co-existence. Uwadinma’s work is defined by past and present experiences of the Nigerian State and Africa’s history.
Uwadinma has exhibited extensively in several group exhibitions in Nigeria in addition to two solos, Aphorism, at Mydrim Gallery, Lagos in 2013 and Erasure, at Boys’ Quarters Project Space, Port Harcourt in 2014/2015. He lives and works in Port Harcourt, Nigeria.


Uwadinma's recent stylistic rendition explore the dynamics of fragmentation and the visual tessellations of hues which he combines with strong compositional organization to create complex, yet simple visual metaphors. This present engagement underscores his urge to see a world transformed by the engagement of truth and morality.
Johnson Uwadinma was born 1982 in the city of Zaria, Kaduna State, Nigeria. He obtained a Bachelor’s degree in Fine Art and Design (Painting Major) and an Master’s degree in Painting from the University of Port Harcourt in 2005 and 2013 respectively. He is a recipient of several awards including Chief Jubilee Owei Art Prize for Excellence and First Prize, NNPC/EPNL World Environment Day Art Competition. He has participated in several exhibitions and has his works in private and public