Chika Idu returns with the Other World

An an art exhibition of watercolour and oil paintings by Chika Idu opens on Saturday, May 23 and runs until May 30 at Alexis Galleries, Victoria Island, Lagos. Titled The Other world, Idu revealed this during a press session recently in Lagos, that the exhibition will feature 20 works.

The upcoming solo show says a lot about nature, the environment, sanitation and pollution. Idu asserted that he is using the exhibition to create awareness for the limitations and hazards which sand excavation from the Lagos State lagoon can bring to the inhabitants of the State, especially those living very close to the riverbanks. “This is why I titled the exhibition The Other World,” he said.


His technique and style are characterised by heavy texture and hazy rendition which he calls “light against visual distortion.” Idu has been painting this technique for 16years and his favourite themes are women and children. Idu sees himself as an activist. He sees his work as the beginning of a dialogue and not the dialogue or the end of it.

Most of his works for this show have children as the subject. “I use children as my subject because I have seen underage being the bread winner of their family,” he said.  You will be seeing children, boats and water. 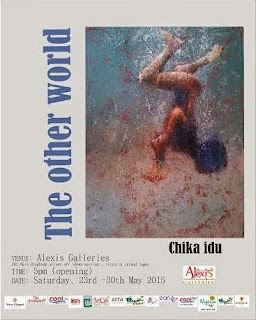 He urged art collectors or whoever intends to purchase his works to always check the back for his footprint. The show is being curated by the CEO of Alexis Galleries, Mrs Patty Chidiac. “I have known Chika Idu for four years and Alexis Galleries is happy to show his works,” she said.

About the artist
Chika Idu was born in 1974 in Delta State of Nigeria. He had his early childhood and education in Lagos, Nigeria and his Higher National Diploma (HND) at Auchi Polytechnic in Edo State Nigeria in 1998.  He has participated in numerous group and solo exhibitions. In the year 2000 he created the first ever watercolour society of artists called 'Sables'. Four years ago he moved his studio to Ikorodu where he currently works he is a full time studio artist.