Juliet Ezenwa says her upcoming solo was conceived out of… 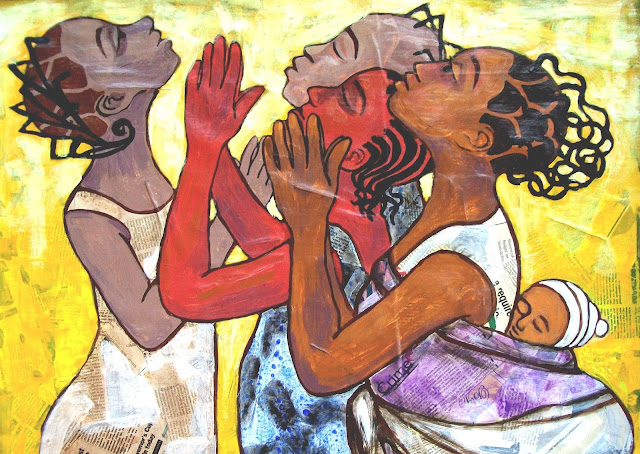 Beyond 2018 is the theme of Juliet Ezenwa Maja-Pearce’s next solo art exhibition, which will open on Saturday August 25 at the National Museum, Onikan, Lagos, Nigeria.
Stating what inspired her to put up the show, she says: “I woke up one day and found that just listening to the radio depresses me. To keep at what I’m doing, I decided it was safer to look past the present situation, and see a bright future; a better society and time. And so I focused my mind there; that was how my creativity returned.”
Beyond small presentations, which have characterized Maja-Pearce’s shows in recent times, this exhibition will audaciously unveil new works resulting from an experiment spanning over two decades and benefited by a broad spectrum of influences. 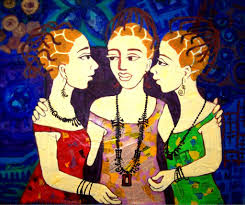 The six days’ exhibition will feature over twenty remarkable new works. The high expectations for this art exposé are anchored on the distinguished personality of the artist. With over 27 years of illustrious practice, her works count among the definitive features of the contemporary visual language in Nigeria. Alongside a few other female artists, she has also carved a place of pride for the female gender in what appears a male-dominated milieu.
According to the curator of the exhibition, Mr Luciano Uzuegbu, the paintings and works are in diverse media including oil, acrylic and found objects of sorts; all bearing the signature of remarkable adroitness as they attest to the anguish, yearnings and aspirations of the artist. “In fixing my Beyond 2018, I decided to hide in the future that I see in Nigeria, my society, as there is not much inspiration from current events in the country,” states Maja-Pearce.
Maja-Pearce’s works engage socio-cultural issues mostly relating to ‘women rights’, ‘marriage’ and ‘togetherness.’ Amongst her prominent statements challenging some of the subjugations of the female gender are paintings of (Eastern Nigerian) Igbo maiden masquerades reminiscent of Ben Enwonu’s renderings of same.
She had participated in various shows many out the country. “After I had a solo at Nike Gallery in 2012, I have had other shows - including a solo - early this year at Transcorp Hilton, Abuja, which were always small collections because of the space,” the artist explains. 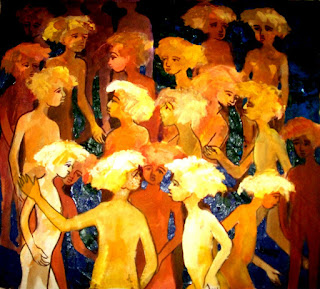 Of the masks, she contends: “I wanted to produce something retro; taking from the past and presenting it in a modern and new format. I wanted to produce something uniquely different. Of course, I studied African masks, and with regard to the ogolo or maiden Igbo masks, you cannot study it without encountering and drawing references from the master, Ben Enwonwu. In fact, you would not be faulty to say that mine is a replica of Enwonwu’s masquerades; that would be a compliment for me as a younger artist,” she remarks, while also drawing attention to the fact that she hails from a part of Delta that is Igbo and where the maiden masquerades also exist.
“However, many of my masks I have adjusted to be able to tell my story about them, for instance, assigning horns, a symbol of strength, to maiden masquerades as opposed to the chauvinistic traditional association.” This, she hopes, will radically persuade the men folk to accept that women are potential leaders, while spurring women to take up the challenge of aspiring beyond the second-fiddle position.
Also in her vibrant, colourful portraits of young girls with neat, braided hair, Juliet calls attention to the African girl-child whose rights should include a good education and so much more.
Regarding the artist, Luciano Uzuegbu notes: “It will be appropriate to observe that Juliet has participated in several UN-sponsored projects advocating the girl-child and women rights, and has become one of the strongest voices from the visual art in that campaign.” 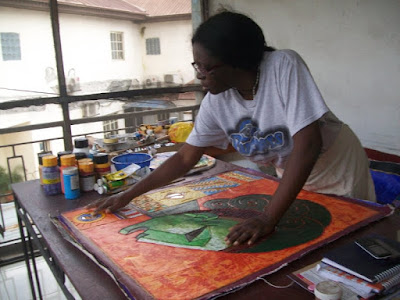 The above figurative of (adolescent) females includes deep, muddy African colour that pays homage to Juliet’s childhood memory when she assisted her grandmother, a traditional wall decorator, in embellishing walls with Uli mud paint, an art form institutionaliaed by the Nsukka Art School.
In the Togetherness and Marriage series, we see traces of the unique detailing and technique synonymous with Dr Bruce Onobrakpeya’s work, one of Juliet’s influences. Here, she has used mostly off-white and less vibrant colours, and incorporated several materials to illustrate as well as provide depth and texture on the canvas. Sometimes, there are depictions of humans in ‘unbroken circles holding hands amidst busy, chaotic situations,’ as the artist advocates peace and unity. Other times, the visuals are collapsed into abstract geometric shapes with labyrinthine motifs that suggest diverse influences, one of which the artist identifies as Abdoulaye Konate, a Malian artist.
Two relatively large pieces of predominantly black and gold colours explore the concept of marriage in Africa. Titled Happy Family, they depict the father, mother and children right in the centre, surrounded by masks representing the elders in an extended family arrangement. “…it highlights the peace of an African family and how they enjoy the benefits of extended family system; so that marriage is not an isolated case of man, wife and children living alone from other relatives,” observes Juliet.
Born in Benin City, Maja-Pearce obtained her BA in Visual Art from Bendel State University (now Delta State University), Abraka.