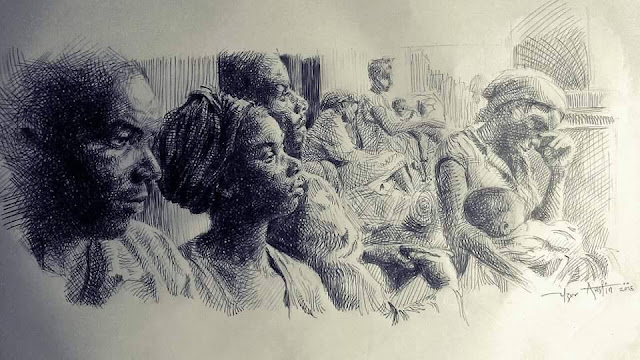 Through skilful line work in his powerful self-expression, Austin Uzor combines obsession, musings, and attention getting strokes to the details of his drawings.

Twenty Four year-old Austin Uzor may not be one of the big names in the Nigerian art scene, but has created a niche for him with his compelling sketches, and simple, yet complicated strokes. A rare technique he discovered seven years ago. The basic medium he uses in producing the drawings are ballpoint pen on paper which he called "dynamic lines."

What is dynamic lines? The full time studio artist, who based in Enugu State said, “Just lines in motion. I always love interpreting everything in lines. I see movement in everything and lines alone can depict movement.” How does he achieve the line drawing? “I cross hatch, produce hatches, curved lines, scribbles and a dynamic movement of rhythmic lines in motion to establish forms. All can be seen in just one piece.”

When Uzor entered the university in 2009, he was determined to do things differently in order to stand out from the crowd. “This made me develop my own style in drawing as I carried out series of experiments in drawing and painting respectively. I eventually ended up specialising in painting, as I love to paint as much as I love to draw.” His efforts paid off as he bagged the best graduating student of Fine Art Department prize in 2013.

Apart from developing his unique style, the University of Nigeria, Nssuka (UNN) graduate knew he had to create a brand for himself in the highly competitive world after his graduation. Uzor began to explore line movement, and with constant practice he found the impressively delicate lines technique. “As soon as I was done with school, I knew I had to compete and create a brand for myself, and so I took my drawing style very seriously in a bid to take it to the next level. This drawing style could be linked to so many drawing styles all over the world that I feel it doesn't have a specific name,” he said.

What influenced him to choose art as career? “Growing up I had a slight influence from my dad (Paul Uzor), who was a graphic artist as I watched him work always, but never attempted to try anything out until he passed on in 1998. After his death, while going through his stuff I discovered his sketchbook and fell in love with what my eyes saw. I tasked my self and realised I could draw and that was it. It is notable that during my secondary education, I was the only student who offered visual arts as a course in my o level exams because of my love for drawing and painting.

Ibe Ananaba, who took pen drawings in the Nigerian contemporary art scene to the next level, Uzor revealed was also a big motivation.  “Ananaba took drawing to a professional level in Nigeria and opened doors for people like him, who were timid and felt the use of a "cheap and common bic pen" to draw was very unprofessional.”

Was Ananaba Uzor’s lecturer or mentor?  He said no. “I only saw his works online in the year 2010, and felt inspired because I was all about the stroke drawing too. So I got more inspired reading his story, and was more focused than ever. I met him for the fist time in 2015.”

Uzor majored in painting, but he sells more of his paintings than the drawings, he said. How does he feel when drawing with lines and when painting with brushes? “I get the same feeling when drawing and painting, just that I'm the only one who sees the lines in my paintings, and you won't see the lines, they are invisible because I made them,” said the Imo state born artist who has gained fame with his line drawing technique.

Uzor has made over 250 commissioned drawings and paintings for individuals, and organisations. “I have equally participated in a couple of exhibitions within Enugu and Anambra States respectively, one which is the annual Life in My City Art Festival in Enugu State.” He hopes to have his first solo art exhibition in four months’ time even though no gallery has accepted to exhibit his works, and no corporate organisation is coming forth to sponsor the show. “I have reached out to a couple of sponsors and I'm waiting for a reply,” he said.