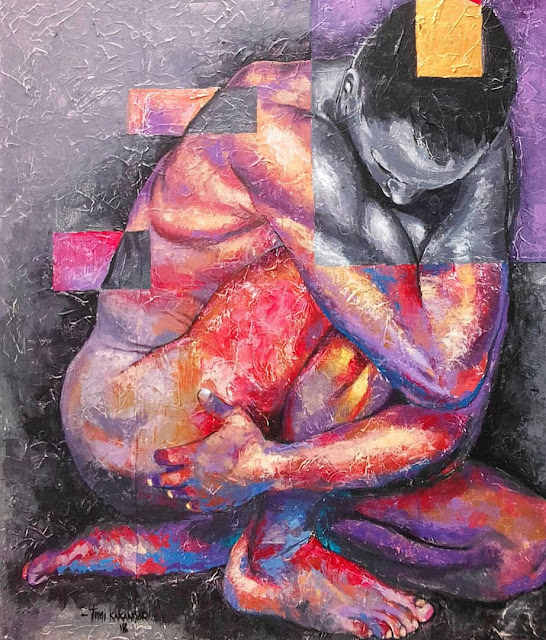 The coming of the social media has transformed the ways in which people interact with each other, the public, the institutions that govern them, as well as their careers. But to one artist, Timi Kakandar, the undesirable effect of social media is having an upper hand and this he considers disturbing. 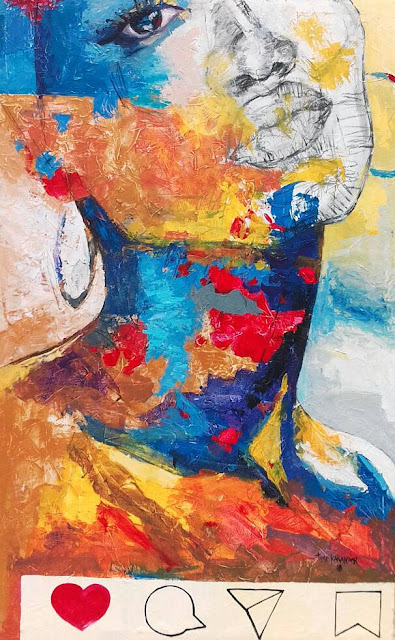 As the social media has found its way into the lives of many, so has it found its way into the work of Kakandar.  “I feel intrigued by the attention the social media is receiving and the way ourselves are being fused with it. When the social media started it used to be a medium to reach out to people but now it has gone beyond that. It’s getting to an additive phase and everyday I see people get lost in it.”
Looking at what he called growing obsession, he said: “This is disturbing because people are beginning to lose touch, people are beginning to be dependant on it so much. The dependance is becoming crazy,” but he admitted that people are also benefiting from it.
“And to live life based on the number of post likes, comments and shares, is to live a life of vanity.”
Kakanda’s work taps into a world of beauty, poetry and the spiritual balancing bold elements in the paintings full of life, movement and colour. This was seen in his last solo at the Freedom Park, Lagos titled Synthesis. The show ended this weekend.
Inspired by the rise of social media. The show beyond generating awareness on the influence of the social media, brings a question mark. “It asks people to stop and think, and reason out the situation. It’s frightening. We are becoming too dependent on the social media. People should try to bring a check; some kind of balance to it, that is what my work does. My work asks questions like how can we make it better? How can we stop looking for validation?” 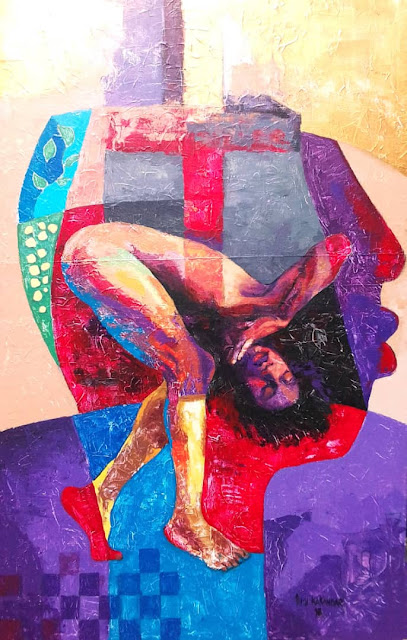 Talking about a piece titled Validation, the artist from Bayelsa State said: “People go to the internet and post pictures, if they have about 200 friends they are believing or waiting for those 200 friends to click the like button and when they wait and see that a few friends have liked the image that they posted, they begin to look deeply into the image and question the image because they are searching for validation, sometimes from a total stranger. When they post an idea and no body had liked it or showed support, they start feeling like ‘is this post okay’, so they are seeking validation. Even those on the street are connected and are seeking validation. When they don’t validate our images on the social media or like it, we start to feel there is something wrong with the image.”
Media Queen was among the 30 works on view. “The piece is also about people seeking validation. People are waiting to get likes when they post, when the likes are increasing they get excited.”
According to the artist, who graduated from the University of Port Harcourt, Rivers State, the negative impact of the social media has been heavy on his mind since last year. His is trying to use his work “to get peoples’ mind off the social media. As an artist, what I think we usually do is a take snapshot of the society and preserve it. I have done that with this exhibition,” he said.
By Udemma Chukwuma